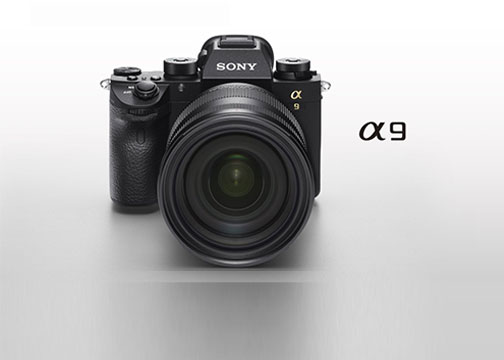 “The new camera offers many impressive capabilities that are simply not possible with a modern digital SLR camera, including high-speed, blackout-free continuous shooting at up to 20 fps, 60 AF/AE tracking calculations per second, a maximum shutter speed of up to 1/32,000 second and much more,” the company announced.

These specs are made possible due to the E-mount α9’s 35mm, full-frame stacked Exmor RS CMOS sensor. The back-illuminated sensor is engineered to enable data processing at up to 20x faster than previous Sony full-frame mirrorless cameras. Furthermore, the sensor makes possible an ISO range of 100–51,200, which is extendable from 50–204,800.

In addition, the sensor is paired with a brand-new, upgraded Bionz X processing engine and front-end LSI that maximizes overall performance. Their combined processing power allows for faster AF/AE (autofocus/autoexposure) calculations while also reducing electronic viewfinder (EVF) display latency. The processor and front-end LSI are also responsible for a larger continuous shooting buffer. As a result, photographers are said to be capable of shooting at 20 fps with continuous AF/AE tracking for up to 362 JPEG or 241 RAW images.

These components also work with a focusing system that uses 693 phase-detection AF points. Covering approximately 93% of the frame, the system is designed to ensure that even the fastest moving subjects are captured and tracked across the frame. The hybrid AF system pairs the speed and tracking performance of phase-detection AF with the precision of contrast AF. Sony says it achieves approximately 25% faster performance compared with the α7R II.

“This camera breaks through all barriers and limitations of today’s professional digital cameras, with an overall feature set that simply cannot be matched considering the restrictions of mechanical SLR cameras,” said Neal Manowitz, vice president of Digital Imaging at Sony Electronics. “But what excites us most about the α9—more than its extensive product specs—is that it allows professionals to see, follow and capture the action in ways that were never before possible, unlocking an endless amount of new creative potential.”

The camera’s AF system tracks complex, erratic motion with higher accuracy than before. Specs state it has the ability to calculate AF/AE at up to 60 times per second, regardless of shutter release and frame capture. Furthermore, when the shutter is released while shooting stills, the EVF is said to function with no blackout, giving photographers a seamless live view of their subjects.

Furthermore, the α9 features a vibration-free, fully electronic, silent anti-distortion shutter said to have no shutter noise. The camera also employs a new Z battery with approximately 2.2x the capacity of W batteries. And dual SD media card slots include one for UHS-II cards.

An Ethernet port (wired LAN terminal) is available as well, to transfer content to a specified FTP server at high speed. There is also a sync terminal to enable external flash units and cables to be connected directly for flash sync.

Sony equipped the α9 ILC with a variety of other new components, settings, controls and customizability options geared for working pros. Among them is a high-resolution, high-luminance Quad-VGA OLED Tru-Finder EVF with approximately 3,686K dots.

This makes it the highest resolution viewfinder ever for a Sony α camera. And it offers a luminance that is 2x higher than the Tru-Finder used on the α7R II, to create an image with a brightness level said to be nearly identical to the actual scene.

In addition, the EVF incorporates an optical design that includes a double-sided aspherical element. This helps it to achieve 0.78x magnification and corner-to-corner sharpness. The EVF also utilizes a Zeiss T* coating to reduce reflections, and a fluorine coating on the outer lens aids in repelling dirt. The frame rate of the Tru-Finder is even customizable, with options to set it for 60 fps or 120 fps.

The α9 also incorporates a 5-axis image stabilization (IS) system that provides a shutter speed advantage of 5 steps. Also, with a half press of the shutter button, the effect of the image stabilization can be monitored in the viewfinder or on the LCD screen. This allows photographers to continually check framing and focus.

The α9 has several new and updated focus functions to support faster, easier focusing. A multi-selector joystick on the back of the camera permits shooters to shift the focus point within the frame by pressing the multi-selector in any direction up, down, left or right. This is possible when shooting in zone, flexible spot or expanded flexible spot focus area modes.

The camera also offers touch focusing on the rear LCD screen for selecting and shifting focus toward a desired focus point or subject.

And a first for Sony E-mount cameras, the α9 includes separate drive mode and focus mode dials. Plus a new “AF on” button can be pressed to activate autofocus directly when shooting stills or movies. Another new capability is “AF area registration.” This feature allows frequently used focus areas to be memorized and recalled via custom button assignments.

Furthermore, shooters can assign specific settings to a custom button to be instantly recalled when needed. The camera can memorize and automatically recall the last focus point used in a vertical or horizontal orientation as well. As a result, it can switch back to it when that specific orientation is used again.

The α9 is additionally engineered to record 4K (3,840×2,160p) video across the full width of its full-frame sensor. When shooting in this format, the camera uses full pixel readout without pixel binning to collect 6K information. It oversamples the data to produce 4K footage with detail and depth. Recording is also available in the Super 35mm size.

Additionally, the camera records Full HD video at 120 fps at up to 100 Mbps. This allows footage to be reviewed and edited into 4x or 5x slow motion video files in Full HD resolution with AF tracking.

The Sony α9 full-frame, mirrorless camera will ship this May for $4,500.

Sony also released a selection of accessories to complement the α9 camera.

NP-FZ100 Rechargeable Battery. This high-capacity battery has approximately 2.2x the capacity of the NP-FW50 W-series battery. It also supports InfoLITHIUM technology. This makes it possible to view the remaining battery power as a percentage display and five-step icon on the camera’s LCD.

VG-C3EM Vertical Grip. The grip provides the same operation, handling and design as the α9. It also doubles battery life and permits USB battery charging via the camera.

NPA-MQZ1K Multi-Battery Adapter Kit. The external multi-battery adapter kit functions as an external power supply for four Z-series batteries. It can also act as a quick charger. It comes with two packs of NP-FZ100 rechargeable batteries.

GP-X1EM Grip Extension. This grip extender has the same look, feel and design as the α9 body. The extender is designed to enable a more solid hold on the camera.

BC-QZ1 Battery Charger. The BC-QZ1 is engineered to charge one new Z-series battery in approximately 2.5 hours.