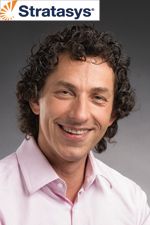 Minneapolis, MN—Stratasys Ltd., a manufacturer of 3D printers and materials for personal use, prototyping and production, appointment Gilad Gans as president of its North American operations.

Gans will oversee Stratasys’s North American sales and field operations, as well as its expansion efforts across the region. He will transition from his role as executive vice president of Global Field Operations during the first six months of the year.

Since the Objet-Stratasys merger, Stratasys’s vice president, Woody Frost, has been responsible for North American operations in the position of general manager. After 12 years at Stratasys in a variety of senior executive positions in sales, marketing and service, Frost will transition to a key role, reporting to Gans and focusing on North American growth initiatives.

“North America is a key market for us,” said David Reis, Stratasys’s CEO. “Our rapid growth and changing market conditions prompted this move to position ourselves to address market opportunities, as well as to support evolving customer needs. Gilad has a track record of establishing and growing significant parts of our business since he joined Stratasys in 2009. We believe that Gilad’s expertise and leadership will benefit and support our plans for continued growth in North America, and we look forward to him stepping into this new role.” stratasys.com