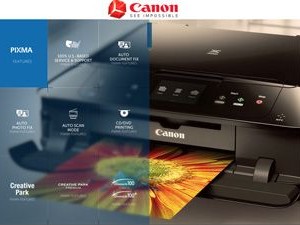 Engineered for high-quality photo and document printing and creative applications, each new model connects to wireless networks easier than before for quick printing from the Canon Print Inkjet/Selphy application with compatible smartphones and tablets. They also include copy and scan functions. And all utilize new genuine Canon inks, to provide “deeper blacks and more vivid reds in photos” and more visual impact for printing documents on plain paper than previous models. Another improvement is a reduction in the initial setup time of the printers, as compared to predecessors.

New features include the ability to print images directly from any Instagram feed, while Canon Easy-PhotoPrint+ and Creative Park web applications can be accessed from smartphones/tablets to share and edit photos using cloud technology. Plus, via the updated Canon Print Inkjet/Selphy app, all seven can print and scan images and documents to online social platforms and services, such as Facebook, Twitter, Flickr, Photobucket, Dropbox, Evernote, Google Drive and Microsoft OneDrive. In addition, the models support Google Cloud Print for printing from Gmail and Google Docs on a mobile device, and from the Google Chrome browser.

“We are excited to announce these new Pixma printer models, including a new flagship model, that are ideal for anyone looking for a multipurpose printer with simple, direct wireless capabilities for easy printing of photos and documents,” said Yuichi Ishizuka, president and COO, Canon USA, Inc. “With an improved start-up process, new ink cartridges and an increase in compatible applications available making the printing experience more seamless, these printers cater to those that want to create high-quality prints at home or on the go.”

Pixma MG7720. With Pixma Touch & Print that allows direct printing from compatible Android devices, the MG7720 comes with Canon’s Intelligent Touch system user interface and a 3.5-inch touch screen to navigate through menus. It uses six individual ink tanks to produce “photo lab quality” photos as well as documents. It will come in black, white, gold and red for a suggested retail price of $199.99.

Pixma MG6800 Series. Also with Pixma Touch & Print, the series offers a 3.0-inch TFT touch screen and a five-color individual ink set. There is a dual-purpose paper tray for plain paper in addition to photo paper, and a 4×6-inch borderless photo can be printed in about 41 seconds. The MG6820 printer will be available in white and black, the MG6821 in black/silver, and the MG6822 in white/silver. $149.99.

Pixma MG5700 Series. The series’ five individual ink tank system includes four inks for use in printing a color document or image plus a dedicated ink tank for printing black-and-white text documents. These models are also capable of automatically printing a two-sided document. The MG5720 printer will be available in white and black, the MG5721 in black/silver, and the MG5722 in white/silver. $99.99.