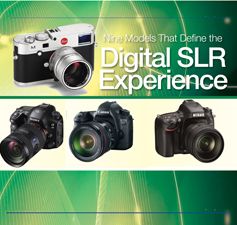 Today’s DSLRs are a far cry from what they used to be a few years ago in terms of resolution, high ISO and autofocus performance, burst rate, shutter lag, HD video capability and many other quantifiable parameters. In fact, four out of the nine cameras in this compilation of upmarket models are not technically SLRs at all, because they lack the SLR’s defining feature—a flipping mirror behind the lens that reflects the image up into an eye-level optical viewfinder.

The reason? The electronic viewfinder (EVF) has come a long way in terms of resolution, color fidelity and refresh rate. OLED EVFs in particular provide users with a satisfyingly realistic 100%, high-magnification view of the image directly off the sensor in real time and as the camera and its exposure system “sees” it. In other words, from a user perspective, the EVF cameras in this article all provide the DSLR shooting experience, and they’re marketed alongside traditional DSLRs. Ergo, you now know why we’ve included mirrorless models, one Translucent Mirror technology (TMT) camera and one remarkably advanced classic rangefinder camera in our roundup.

Despite increasing competition from DSLR-style, extended-range point-and-shoot cameras, and mirrorless compact system cameras (CSCs), DSLRs are still the go-to models for most pros and many serious enthusiasts. And that’s why the camera manufacturers are still actively developing impressive new models.

Clear trends: An increasing number of full-frame models in the new $2,000 class aimed at emerging pros and more knowledgeable prosumers (the Nikon D600, Canon 6D and somewhat higher priced Sony A99); the migration to technically advanced and upscale APS-C and Four Thirds-format mirrorless designs, as exemplified by the Samsung NX20 and Panasonic DMC-GH3; and innovative approaches that deliver unique feature sets, as demonstrated by the one-of-a-kind Leica M, the Sigma SD1 Merrill and the “filterless” high-res Pentax K-5 IIs.

Nikon D600
Nikon’s genius approach for a successful enthusiast-aimed full-frame digital SLR is simple—it’s a relatively compact, slightly scaled down version of the top-selling D800 for nearly $1,000 less. In place of the D800’s class-leading 36MP sensor, the D600 offers a 24.3MP FX-format CMOS sensor. Its other specs are equally impressive, including Nikon’s Expeed 3 image processor, a 3.2-inch LCD monitor, Full HD 1080p video capture at 24, 25 and 30 fps, and ISOs to 6400, which are extendable to ISO 25,600. It boasts a blazing (for the full-frame class) 5.5-fps burst rate and 39 wide-area AF points, and it has a stereo mic, headphone inputs and built in i-TTL flash capability. You can add Wi-Fi connectivity with the WU-1b optional wireless adapter. $2099.95, body only. nikonusa.com

Sigma SD1 Merrill
Renamed to honor the late Richard Merrill, cocreator of Foveon X3 direct image sensor technology, Sigma’s pro DSLR features a higher res, bigger (full APS-C-format) version of the unique three-layer Foveon X3 sensor. The sensor works like film to deliver full color information at each pixel in each of its three layers—to provide a total of 46 megapixels. Upgrades include a Dual True II image-processing engine, a 3.0-inch LCD and a magnesium alloy body with O-ring-sealed buttons and enhanced weatherproofing. Key performance upgrades provide a maximum burst rate of 5 fps, a 100,000-cycle-rated shutter, an 11-point twin cross-sensor AF system, ISOs to 6400 and a shutter speed of 1/8,000 sec. While the SD1 does not provide live view, video capture or tethering capability, it does offer pro-oriented features like micro AF adjustment, three custom settings in the exposure mode (PASM) and a removable IR filter for infrared shooting. Where it really shines is in its imaging performance, especially at low ISOs; in the ISO 100–400 range it delivers a distinctive and gorgeous film-like character that captures exquisite detail and superb color rendition. $2,299, body only. sigmaphoto.com

Olympus E-5
Still the pillar of the Olympus pro DSLR line, the Olympus E-5 provides HD 720p video capture at 30 fps and a built-in monaural microphone, but photographers can record in stereo by plugging any microphone with a 3.5mm jack into the E-5’s stereo microphone terminal. It incorporates Olympus technologies as support for its 100% digital-specific lenses, a supersonic wave filter dust-reduction system, full-time live view and a completely splashproof and dustproof magnesium alloy body.

Leica M
Why did we include this iconic interchangeable-lens rangefinder in our DSLR roundup? Because, by adding a compact, optional EVF-2 eye-level viewfinder, it provides full DSLR functionality with both M-series and (via an R adapter) R-series Leica lenses. What makes this possible is that the Leica M is the first of its breed to provide live view off an upgraded 24MP full-frame Leica Max CMOS sensor. And its new Leica Maestro image processor captures Full HD 1080p video at the touch of a dedicated button—another important first. On the back of its weather-sealed magnesium alloy body is a 3.0-inch 920k-dot LCD, and the upgraded specs include ISO settings to 6400, 3- or 5-step exposure bracketing at 0.5-, 1-, 2- and 3-stop intervals, live view zoom, and a visual focus-peaking indicator for enhanced focusing precision. This is in addition to the Leica M’s signature bright-line optical range/viewfinder with automatic parallax-compensating frame lines and a four-digit, seven-segment LED display with automatic brightness control. $6,950, body only. us.leica-camera.com

Pentax K-5 IIs
This latest top-of-the-line iteration of the classic Pentax K-5 DSLR eliminates the anti-aliasing filter to provide superior resolution and detail capture (at the expense of recording moiré patterns with certain subjects). Aimed at enthusiasts and pros who shoot in RAW and typically tweak the final image in post-production, its features include an APS-C-format 16.3MP CMOS sensor with integrated A/D circuitry, a new 11-point SAFOX X AF system with a wider EV range for focusing on subjects in low light, an integrated sensor-based shake reduction system to combat blurring, a maximum ISO setting of 51,200, a 7-fps burst rate, a shutter speed that tops out at 1/8,000 sec, Full HD 1080p video capture with an external mic jack, and HDMI output for stills, video and sound. Like the earlier version, the K-5 IIs has a body that is fully weather sealed and coldproof. $1,299, body only.

Panasonic Lumix DMC-GH3
This intelligently upgraded successor to the much-admired Micro Four Thirds-format Panasonic Lumix GH2 features a 16.05MP Live MOS sensor coupled to a new 4-CPU Venus engine, which enables the GH3 to capture high-res JPEG and RAW files as well as Full HD 1080p video at 60p 50Mbps and cinematic 24p 72Mbps. Its other key features are OLED displays both for the monitor and the live view EVF, full-area and pinpoint autofocus, auto HDR for still photos, electronic front and rear shutters, a built-in digital level and Wi-Fi connectivity. For videographers, there are additional creative functions, such as 40%, 48%, and 89% slow-motion video modes. A revised button layout improves operational speed and convenience, and it’s all built into a tough, weather-sealed magnesium alloy body. $1,299.99, body only. panasonic.com 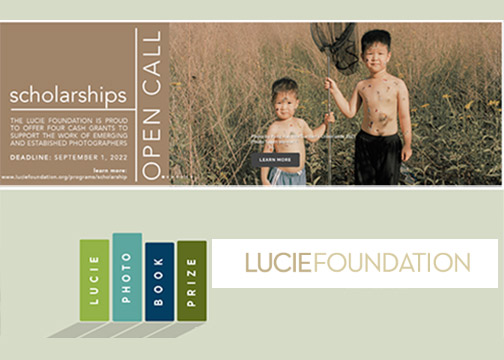