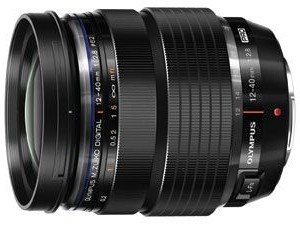 M.Zuiko Digital ED 12–40mm f/2.8 Pro. Scheduled for a November release, this 24–80mm equivalent lens is the first model in the new M.Zuiko Pro category. It features dustproof and waterproof performance, and its mount employs the same type of sealing as the OM-D E-M1’s camera body. The lens is Movie & Still Compatible (MSC) with high-speed, near-silent autofocus during still shooting and high-definition (HD) video capture. Olympus notes it “maintains the brightness of a constant f/2.8 aperture for high-grade image creation, one of the requirements of professional photographers for a high-performance lens.” $999.

M.Zuiko Digital ED 40–150mm f/2.8 Pro. This 80–300mm equivalent lens will also join the new M.Zuiko Pro lens category. It is currently under development, with a planned release in the latter half of 2014. It will be a telephoto zoom lens with a bright constant f/2.8 aperture and will feature a dustproof and splashproof construction rugged enough for professional use. Pricing to be announced. olympusamerica.com