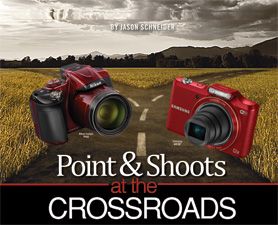 With many dealers cutting back their point-and-shoot offerings and dire predictions that smartphones are destined to decimate their ranks, can there possibly be any silver lining in the dark clouds on the point-and-shoot horizon? Well, it all depends on how you look at the situation.

As a generic category, point-and-shoot cameras certainly appear to be in a long-term retrenchment phase, but since any camera lacking interchangeable lenses is automatically lumped into this huge, diversified class, there are fairly large swaths of the P&S universe that are not only doing quite well, thank you, they’re actually evolving and expanding.

A notable example is the explosion of ultra-long-zoom P&S cameras that have morphed into machines that provide virtually complete DSLR functionality and form factors, albeit with built-in ultra-wide-angle to super-telephoto zoom lenses in lieu of interchangeable lenses. Relatively compact, lightweight and typically more affordable than DSLRs and compact interchangeable-lens system cameras with larger sensors, many provide high-res EVFs and comprehensive feature sets that include Full HD 1080p video plus the latest must-haves—GPS and Wi-Fi connectivity to upload images seamlessly to those dreaded smartphones (a classic example of the time-honored maxim, “If you can’t beat ’em, join ’em!”).

Ultracompact, stylish cameras with zoom lenses in the 12x–21x range are also holding their own with several exciting new models having been recently released.

Yet another important P&S category that has held steady or even expanded a bit is submersible, all-weather everything-proof point and shoots exemplified by the iconic Olympus Tough series (such as the current TG-2) and the new Ricoh-branded WG-4 GPS (the latest upgraded iteration of the waterproof, shockproof line previously marketed as the Pentax WG series).

Finally, there’s a newly emerging P&S category with upside potential: competent enthusiast-aimed compacts with unique features such as Canon’s intriguing PowerShot N100, which has a second rear-facing camera integrated into it that lets users capture and compose images of themselves while photographing a scene. This answers the incessant lament of photographers’ spouses: “How come I never see you in any of the family pictures?”

To give dealers a better idea of what’s brewing on the point-and-shoot front, herewith is our editors’ savvy selection of great new point-and-shoot cameras—the majority of which are so new they’re only available for advance order as we write this. One thing is for sure: once you ogle them and peruse their cool specs, you’ll see that P&S is far from a moribund category. It is fighting back and we wouldn’t be at all surprised to see its market share increase going forward.

Nikon Coolpix P600. Pushing Nikkor optics to greater lengths, the P600 boasts a 60x optical zoom with a 24–1,440mm (equivalent) range and the capability to reach further using its 120x dynamic fine zoom function. Lens-shift vibration reduction (VR) image stabilization is incorporated to reduce the effects of camera shake. And once captured, images can be transferred to a smart device using built-in Wi-Fi. Other features include: a 921k-dot, 3.0-inch vari-angle LCD that lets users shoot above a crowd or get down low; a 16.1 megapixel BSI CMOS sensor; Full HD 1080/60i video recording; manual controls (PSAM); an electronic viewfinder; the new moon and bird-watching modes; and an improved battery life. The P600 comes in black and red. $499.95. nikonusa.com

Sony Cyber-shot DSC-WX350. Just released as we went to press, this elegantly thin and stylish compact is claimed to be the world’s smallest camera with a 20x optical zoom (it gets out to 40x with virtually no quality loss using Sony’s Clear Image Zoom system). The WX350 incorporates an 18.2 megapixel Sony Exmor R CMOS sensor coupled to its latest high-tech Bionz X image processor. Other features include: Optical SteadyShot with intelligent active mode said to provide smoother, more stable stills and movies; built-in Wi-Fi and NFC for one-touch wireless transfers and remote control from a smartphone; and Full HD 1080p video capture at 60p and 60i framing rates. It will be available this month in a choice of black or white. $320. sony.com

Leica X Vario. Leave it to Leica to design a P&S camera that’s built to set new standards in performance and finesse. For starters, the made-in-Germany X Vario incorporates an SLR-size 16.1MP APS-C-format CMOS sensor and a 28–70mm (equivalent) f/3.5–6.4 Leica Vario-Elmar Asph lens that includes aspherics and exotic glass. Its hefty, ergonomic aluminum/magnesium alloy body is as solid as that of an M-series Leica, which it resembles. It also features: intuitive controls with manual focusing and exposure options; ISO 100–12,500; a built-in pop-up flash; a 3.0-inch, 920k-dot LCD; Full HD 1080p video capture at 30 fps; and a wind-cut filter. According to test reports, its performance is breathtaking at all but the highest ISOs. And so is its price. $2,850. us.leica-camera.com

Olympus Stylus 1. Styled in a traditionalist mode with echoes of the classic Olympus OM-1 35mm SLR, the Stylus 1 is aimed at serious enthusiasts. This 10.7x zoom camera provides a high-performance i.Zuiko lens with an equivalent focal length range of 28–300mm and a constant f/2.8 aperture—great for shooting in low light or creating bokeh. It incorporates a 12MP, 1/1.7-inch BSI CMOS sensor, a 3.0-inch, 1.04m-dot, tiltable, touch-screen LCD and a 1.4m-dot EVF with an eye sensor that switches the live view display from the LCD to the EVF as the camera approaches the user’s eye. Other key features include: super macro mode; a hybrid control ring around the lens; customizable controls; a built-in flash; Full HD movies; 120-fps/240-fps movies for slow-motion playback; 7-fps bursts; 11 filters; photo story, which shoots photos into layouts; RAW; Wi-Fi connectivity; and a hot shoe. $699.99. olympusamerica.com

Ricoh WG-4 GPS. It’s the latest version of the former Pentax WG adventureproof line rebadged as a Ricoh and with upgraded features, in particular a new processor that now provides ISO 100–6400. As before, this distinctively styled camera is waterproof (to 45.9 feet), shockproof, crushproof, dustproof and coldproof (to 14ºF). It features a fast 25–100mm (equivalent) f/2–4.9, 4x optical zoom lens, a 16MP 1/2.3-inch BSI CMOS sensor, a 3.0-inch LCD, a user mode for instant recall of favorite settings and dual anti-shake. Its signature feature is digital microscope mode with a circular array of six built-in LED lights positioned around the lens barrel. The WG-4 GPS can capture Full HD 1080p video at 30 fps, and it has a built-in digital compass and, of course, a built-in GPS module. $379.95. us.ricoh-imaging.com

Canon PowerShot N100. Here’s a cool camera for photographers who want to be in the picture but don’t like shooting “selfies” with their smartphones. Based on a 90º tilting design, the N100 incorporates a 3.0-inch, 922k-dot touch-screen LCD that provides an intuitive way to view and control the camera, along with an integrated secondary rear-facing camera that lets photographers capture an image of themselves while taking the main picture. Images captured using the secondary “story” camera can be placed in four locations on the main image and in three sizes. The rest of the camera is cool, too, featuring: a 12.1MP high-sensitivity CMOS sensor; Canon’s Digic 6 processor; a 5x, 24–120mm (equivalent) zoom lens with a wide f/1.8 maximum aperture; Full HD 1080p video capture at 30 fps; NFC/Wi-Fi connectivity; intelligent IS; smart auto; and creative shot mode. It ships in May. $349.99. usa.canon.com