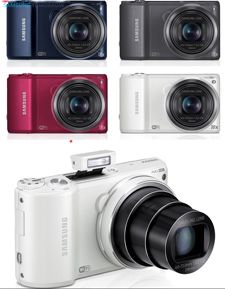 “Samsung has spent the last few years really cementing its leadership in Smart cameras so in 2013 we focused on improving the experience even more and making it as easy as possible for the consumer,” said Ron Gazzola, vice president of Marketing for Digital Imaging. “Connectivity has become the standard for digital photography, but delivering connectivity in the easiest way possible through all-in-one apps, touch LCD screens and features like autoshare truly differentiate Samsung in the digital imaging space and give us a definite advantage.”

Smart 2.0 models, initially announced at the 2013 International Consumer Electronics Show in January, are the evolution of Samsung’s connected cameras that focus on ease of use with touch LCD screens and an all-in-one mobile app. Aimed at smartphone users who want better imaging performance than their phones provide, the new user interface combines touch-typing and big-screen functionality for quicker editing and uploading to devices and social media networks.

A new feature, autoshare, automatically backs up images and video to a smartphone or connected tablet device as they are taken, which means that files are stored safely on the go. In another Smart 2.0 improvement, the Samsung Smart Camera app merges remote viewfinder, MobileLink and autoshare functions into a single app. Smartphone and tablet users can download the app to their Android or iOS device to connect with Samsung’s Smart cameras via a Wi-Fi connection and edit, share and back up images with ease.

WB250F. As the flagship model of the WB long-zoom line, the WB250F enhances the optical zoom for which the WB line is known with Smart Camera 2.0 technology to facilitate easier sharing and saving images. With a classic, yet lightweight form factor, the 14.2 megapixel WB250F, with an 18x optical zoom and a BSI CMOS sensor, is marketed as “the perfect travel accessory.”

A hybrid interface with a touch screen and five-way navigational keys give users control to adjust the WB250F to their preferences, and it also features full manual (PSAM) modes. Also provided is the best face feature, which automatically selects the best facial expressions from a burst shot, while smart mode and motion photo features allow users to achieve full creativity under any condition. And with Wi-Fi capabilities, users can share photos quickly.

The WB250F also includes a pop-up flash that can be tilted forward or backwards, and it is offered in four colors: white, cobalt black, gunmetal and red. $249.99.

DV150F. This model combines Samsung’s DualView technology in the form of a 1.48-inch front LCD screen for self-portrait taking with Wi-Fi connectivity for sharing photos at the touch of its direct-link button. The DV150F offers a variety of creative features, such as smart filters, motion photo and magic frame functions to produce artistic and unique photos.  Additionally, child mode displays colorful animations on the DualView front screen to keep children focused at the lens.