While the point-and-shoot digital camera market has picked itself up from its recession-era lows, the drop in sales has opened the question of just how viable a future the category had before it.

Even before the recession struck, analysts were cautioning that the salad days of robust growth in the point-and-shoot market were drawing to a close. With close to 77 percent of U.S. households owning a digital camera as of 2009 (according to the NPD Group), the market can safely be dubbed mature. Indeed, according to PMA, the total digital market (including SLRs) likely peaked in 2007 at 28.3 million units. Sales are projected to decline further in 2010 to 24.8 million units before picking up slightly into the 25 million range in 2010 and 2011.

The consequence of this contraction are already evident. Average selling prices fell a further five percent in 2009 to $153, according to Liz Cutting, Imaging Analyst, NPD group. The market has consolidated as well. In 2007, the top six brands claimed 79 percent of all point-and-shoot revenue. In 2009, it was 86 percent. That leaves at least 34 other camera brands fighting over 14 percent of a revenue pie that’s shrinking, Cutting said.

Even the big players may rethink their strategies as prices continue to erode, said Chris Chute, Research Manager at IDC’s Worldwide Digital Imaging Practice. “If I’m a Canon or a Sony, do I really want to chase a $100 camera sale,” he wondered.

iTook Your Market Share
Market maturity is only one factor provoking questions, competition from camera phones is another.
Since camera phones first emerged at the beginning of the decade, analysts have questioned whether the standalone digicam’s days were, if not numbered, than likely to be crimped by a device that had the advantage of being with you at all times. Of course, that didn’t happen, as the camera phone’s laundry list of disadvantages kept consumers from kicking compacts cold turkey. Now, those liabilities are disappearing.

“You’re seeing much better resolution and many more features,” built to support the camera phone now, said Tim Bajaran, President, Creative Strategies. And it’s true: Apple’s ubiquitous iPhone packs a 3-megapixel sensor, Microsoft’s new Kin 2 an 8-megapixel and both Sony and Samsung have launched phones with 12-megapixel sensors. Perhaps just as importantly, the rise of smartphones and applications have meant that consumers are finally able to easily share their camera phone photos on websites they actually like (Facebook) and not the carrier’s jerry-rigged contraptions.

Smartphones also bestow another big advantage: metadata. “Smartphones have calendars, contacts and location data—so there’s more intelligence there, which makes the images easier to organize and gives you more to do with them,” said Lisa Walker, President of the International Imaging Industry Association (I3A). “This year there will be some pretty competitive camera phone models on the market.” The I3A works with mobile phone manufacturers in its camera-quality certification process and Walker said that improving the imaging capabilities of their phones is “a very big concern at the highest levels of these companies.”

Even pro photographers have got the bug. “This happened with autofocus, with color print film, what looks like a novelty turns into a reality,” said photographer Jim Cummins.

Still, not everyone’s convinced. Among them photo industry consultant William McCurry of McCurry Associates. “PMA did a survey of households that own cameras. If you had kids you’re above the baseline, which is pretty much what we all know. Also above the baseline: people without kids under the age of 30. Here’s a category we thought we lost to the cell phone camera. What the data showed was that in fact they’re embracing digital photography.”

Beyond the camera phone, the surging popularity of the pocket video camera has made that a potential competitor of the point-and-shoot, Chute said. Its low cost, ease-of-use model, combined with the Internet infrastructure to share videos, has clearly resonated with consumers. Will that, Chute said, lead consumers to reach for their pocket camcorder and not their digital camera as they head out the door? Will video gain a greater share of consumers’ memory-making habits?

Put It On Repeat
Improved camera phones aside, the compact market likely has a little more headroom. When film cameras hit their final peak in 1999, there were 1.44 cameras per U.S. household, according to PMA. Today, with digital cameras, that figure stands at 1.33, suggesting that there is still an opportunity to expand the ownership pool. Such a move will be critical because first-time buyers eventually become repeat buyers. The average film camera was replaced every seven years, according to PMA. The average digital camera churns much quicker: three and a half years.

For manufacturers, that means the trend toward greater personalization will accelerate as they try to coax more members of the household into the market, Chute noted. Waterproof and rugged cameras are one example. The abundance of color and style, another. That presents its own challenges to specialty dealers in particular, McCurry said. “They’ve never sold a fashion accessory before.”

A repeat buyer also entails a savvier consumer and potential for a higher-priced camera sale, Cutting said. “Is a repeat buyer,” she said, “really going to be satisfied with a $129 camera?” The percentage of cameras sold over $200 has increased by five percent from the first quarter of 2009 to the first quarter of 2010, which might be indicative of a more discriminating and demanding customer, Cutting said.

There’s also the option to copy from the Flip playbook, said Chute, and make a camera that’s radically easy to use. “There are four buttons on the Flip camcorder, and it’s very easy to understand. The notion of simplicity in the user interface is something vendors haven’t grasped yet in the compact market.” 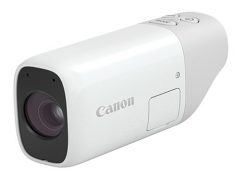