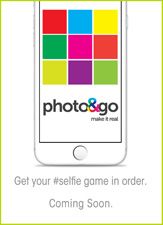 “Over the last few years, our customers have been asking for more photo offerings and services. We launched Photo & Go as an answer to their wishes,” said Struhl.

The company will open its first Photo & Go location at the Town Center Mall in Boca Raton next week, and photoandgo.com plus a parallel mobile app for Android and iOS devices will launch shortly thereafter.

“We’ve exponentially increased the number of products available both in-store in minutes as well as online and have a great pipeline in the works that we’ll add as the holiday season approaches,” added Dov Quint, the company’s other cofounder.

In addition, customers will soon be able to order their products online and pick them up in-store. “The customer is looking for a more seamless and expansive solution for printing their favorite photos, and we’re thrilled to be able to give it to them,” Quint said.

The company’s flagship store, located at The LINQ in Las Vegas, will be rebranded next week to Photo & Go. That location, too, will expand into many other product categories for photo-obsessed Vegas customers.

The company plans to open additional company-owned locations, partner with other brands, and start a licensing program in 2016 to support expansion in the U.S. and overseas.

The new retail concept launch comes after Polaroid Fotobar micro-retail locations in California closed. This included the Sacramento-area Westfield Galleria location in Roseville. “The Fotobar micro-retail store at the Westfield Galleria at Roseville was part of a pilot program to test the feasibility of the kiosk concept for Fotobar,” according to an e-mail statement from Scott Walters, chief financial officer of Fotobar Holdings LLC. “Unfortunately, the performance of that particular kiosk didn’t support our continuing to operate at the Roseville location.” A search by the Sacramento Business Journal “reveals multiple Fotobar locations in California have closed.” photoandgo.com