“We are continuing to innovate with each new camera body, lens and accessory that we bring to market, offering compelling choices to both existing and prospective users of the Sony α system,” said Neal Manowitz, vice president, Digital Imaging, Sony Electronics. “With the α99 II, we’re delivering an industry-leading level of performance to A-mount owners and enthusiasts. Its powerful combination of speed and resolution is simply unmatched in today’s market.”

In addition, Translucent Mirror technology, with no moving mirror, helps ensure steady, continuous AF operation and live image preview during still image as well as video shooting. The AF system is also engineered to perform in low light. It is said to function in brightness levels of EV-45 and in dark locations. 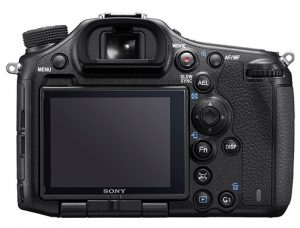 Thanks to a large buffer, those shots can be viewed immediately after shooting. Additionally, if the high-speed shots are being taken indoors under artificial lighting, the camera detects flicker and times the shutter to minimize its effect.

Furthermore, the α99 II delivers 8-fps continuous live shooting with AF/AE tracking and minimized display lag. This is due to improvements in its EVF algorithm. This is said to offer a shooting experience that mimics that of an optical viewfinder. Yet the camera still provides the benefits of an electronic viewfinder, such as a live preview of exposure and white balance. Also, continuous live view shooting can be set in three stages to match various subjects: 8 fps, 6 fps and 4 fps.

The camera’s back-illuminated, full-frame 42.4MP CMOS sensor features a gapless-on-chip design to allow fast readout of large volumes of data and maximize light gathering. According to specs, as a result, it provides “very high sensitivity with low noise, wide dynamic range and 42.4MP resolution across an ISO range of 100–25,600.” That range is expandable from 50 to 102,400. The sensor also omits the optical low-pass filter, to help ensure the finest natural details and textures can be captured. Both compressed and uncompressed RAW files are available. 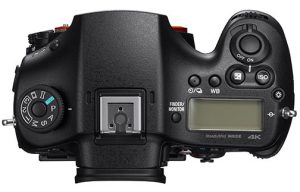 Another first for Sony A-mount cameras, the α99 II records 4K video with full pixel readout and no pixel binning. It uses the XAVC S format. The camera is also capable of recording at 100Mbps for 4K video, utilizing the full width of the full-frame sensor.

In addition, based upon feedback from professionals, the α99 II is 8% smaller than the original ɑ99. And it features a newly designed grip, magnesium alloy body, dual SD card slots as well as dust and moisture resistance.

The Sony α99 II full-frame, interchangeable-lens camera will ship in November. It will have a suggested retail price of $3,200. sony.com