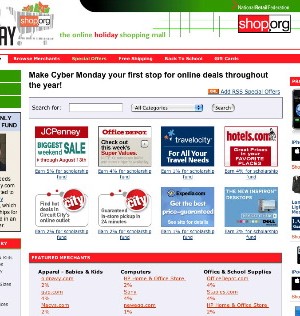 The National Retail Federation has been pushing the entire Cyber Monday concept, launched by Shop.org in 2006, for the last two years now and to say it has caught on would be a major understatement. As the early part of the holiday season begins to step into high gear with Thanksgiving closing in, Shop.org has reported that they have enhanced their shopping website www.cybermonday.com, to include a variety of new features that help consumers find the best holiday deals on the web.

CyberMonday.com officially launched in November 2006 as a “one-stop shop for consumers looking for the best online holiday promotions.” The concept was started when it was discovered that there was a big spike in e-commerce activity the Monday after Thanksgiving as consumers were returning to work after the Thanksgiving holiday. According to Shop.org the site now has more than 500 retailers featuring hundreds of promotions that encourage shoppers to point and click their way through the holiday shopping season. For the holiday season, the site has launched a variety of special promotions and exclusive offers. This year’s new features include:

Shop.org adds that in its first two weeks of operation last year, CyberMonday.com was visited by more than 500,000 consumers. Traffic to the site was so substantial on Cyber Monday 2006 that the company that actually powers the site, Mall Networks, has dramatically increased capacity for the site this year.

Founded in 1996, Shop.org became a division of the National Retail Federation in January 2001.