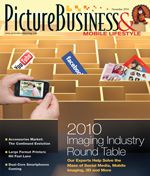 This year's Hall of Fame inductees, will be featured in the December 2010 issue of Picture Business Magazine are:

– Steve Sasson, Kodak — Generally regarded as the inventor of the
digital camera and recently honored by the White House with a Medal of
Science.

Picture Business' Hall of Fame award recognizes individual and retail contributions to the photo industry. Such contributions are made in many forms. The Hall of Fame honors not only the industry's veterans, but also its retail innovators, the visionaries and the deal makers – those who pursue a standard of excellence.

In order to advertise in the special December Hall of Fame issue, call Rick Albuck at 215-238-5215 or email rickalbuck@napco.com.  Space closes 12/1; materials are due 12/6. The December issue of Picture Business will have a substantial bonus distribution at CES.