To say the world of imaging has changed is an understatement.

Looking back even just a few years ago, if you had a DSLR around your neck and a few lenses tucked into your camera bag, you were still safe calling yourself a photographer. You were happy grabbing family portraits, shooting incredible sports images or sneaking up on that ever-elusive cheetah roaming the African plains.

Today, that’s just not good enough. Being a photographer seems to be the one-dimensional response to being unable to keep up with technology. Because today, it’s not just about pictures. It’s about “content.” And it’s not quite good enough to capture a moment. It’s now all about capturing an “immersive 360º experience” that can be viewed on a VR headset or YouTube.

The good news is that this is all great news for the imaging industry.

I was starting to get the feeling that imaging technology was beginning to hit a wall. It’s not the first time I felt this way. Just a few years back, the photo industry (as we used to call it) was caught up in the “megapixel wars.”  Technology changed every six months and was measured by the size of your sensor.

But along with that came many of the innovations in digital technology that we all now take for granted. There was red-eye reduction and facial recognition and all the metadata you can capture with a single exposure.

It reminds me of the cold war space race, where everyone was trying to get to the moon. And when both Russian and U.S. craft finally landed on those craters, we all looked around and said, “What’s next?”

For the last year or two, the imaging industry has been evolving. Yet at the same time, it’s struggling to give photographers a good reason to invest in their next cameras. Technology seemed to be making incremental strides, and the images being produced were only incrementally better as well. The replacement rate of higher end cameras began to lag. Furthermore, the emergence of better smartphone cameras ended the great run of the “point-and-shoot” digital camera. 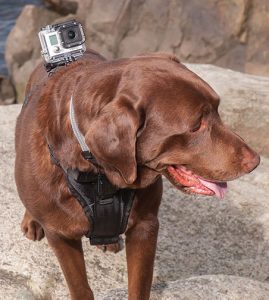 But look around now. We’re not even talking about photography anymore. A simple photograph is “so 2015.”

Led by the GoPro revolution where tiny action cameras began showing up on the ends of surfboards and skis, on the tops of helmets and on the backs of Labradors, the next generation of photographers are not even considered photographers. They’re videographers and producers capturing images that could never even be imagined just a few years ago.

The follow-up has been even more exciting, with cameras like the Nikon KeyMission 360, Ricoh Theta and ALLie camera recording 360º, immersive (and in some cases streaming) video. For the first time, cameras are taking images “behind” the image, and viewers are now given the opportunity to see more than just the story in front of them. And these technologies are still in their nascent stages.  Cameras like the Vuze by Humaneyes take 360º, 3D images, further deepening the relationship between the storyteller and the viewer.

While all of this is happening, video is just getting better and better—and more and more accessible. Whereas 4K was considered an emerging technology just a few short years ago, it has now become the de facto video format for all cameras. Along with Nikon and Canon high-end DSLRs, smaller mirrorless cameras from Sony, Panasonic, Olympus and Fujifilm, among others, are putting powerful video cameras with diverse lenses in the hands of pros and photo enthusiasts, as well as new moms and teens who are realizing there are incredible possibilities beyond smartphone videos if you just give real cameras a chance.

The good news about all of this is, once again, imaging manufacturers have proven that technology hasn’t hit a wall. In fact, it’s gone around the wall and behind the wall. Consequently, it has given a new generation of image makers more reason to visit camera retailers to check out the new tools of the trade.

So kudos to the engineers, developers and dreamers who continue to impress the world by pushing the imaging envelope forward. It’s exciting and intriguing to think about what’s on the horizon.