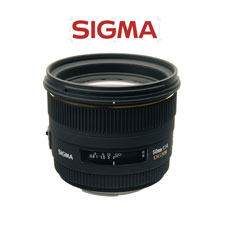 Sigma is sponsoring the WPPI University and Women in Contemporary Photography events. There will also be five chances for attendees to win a Sigma 50mm f/1.4 EX DG HSM prime lens at those events and throughout the show, and Sigma fans are invited to visit the trade show booth, #701, between 2 p.m.-3 p.m. each day to answer the question “Why Do You Love Sigma?” to receive a free Sigma T-shirt.

“We view this anniversary celebration as both a tribute to what we’ve accomplished in the last five decades and as a fete of what’s to come in the years ahead,” said Mark Amir-Hamzeh, president of Sigma Corporation of America. “More importantly, we view this notable milestone as an opportunity to thank our loyal customers and reward them for their dedication to the Sigma brand. At WPPI, and throughout the entire year, we will be offering an array of discounts, giveaways and chances to win to show our appreciation.”

Sigma Corporation of America’s anniversary celebrations and WPPI participation will include:

· Sigma’s Golden Ticket Giveaway: Attendees can stop by booth #701 to receive a free, commemorative deck of cards and a chance to win one of three Sigma 50mm f/1.4 EX DG HSM lenses in a mount (Sigma, Nikon, Canon, Sony or Pentax) of the winners’ choosing. They simply open up the deck of cards to see if they’ve won and then visit the Sigma booth before 3 p.m. on February 23 to claim a prize. Log on to sigmaphoto.com/WPPI for official contest rules.

· WWPI event sponsorship: Sigma raffled off a 50mm f/1.4 in a mount of the winners’ choosing at the WPPI University opening reception and had a table at the Saturday event from 8 a.m. to 5 p.m. The company is also raffling off a 50mm f/1.4 lens at the Women in Contemporary Photography event on February 22 from 7 to 9 p.m.; new Sigma pro and fashion photographer Lindsay Adler will be a member of that panel.

· $50 for 50 coupons: All those that stop by the Sigma booth will receive a $50 coupon that can be redeemed at the show with Sigma’s participating dealers.

· Meet our Sigma Pros: Professional photographers Kevin Ames and Lindsay Adler will be speaking at WPPI. Adler will speak on the topic of her new book, Fashion Flair for Portrait and Wedding Photography, on February 22 from 8 to 10 a.m., and again later that day as part of the Women in Contemporary Photography panel. She will also sign images at the Sigma booth from 10 a.m. to noon on February 23. Ames will discuss “Lighting, Lenses and the Working Photographer” on February 23 from 8 to 10 a.m. at the booth. sigmaphoto.com