Consumers today have more confidence behind the camera, according to the 2016 Photography Trends Study released mid May by Canon USA.

Notable findings include: 80% of consumers rated their photography skills as good to excellent, and 62% of respondents boasted that their skills have improved in the past two to five years. And, “the desire to capture, share and save memories through the power of the image with friends and family is clearly on the rise.” 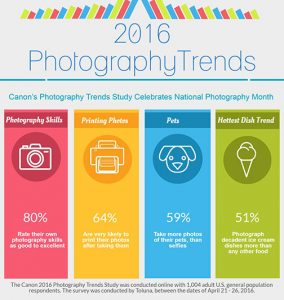 Even while an astonishing number of images are uploaded to social media platforms, Canon found that consumers are still looking to preserve their memories with actual prints.

“Nearly two out of four (64%) of those surveyed indicated that they are likely or somewhat likely to print their photos after taking them. Once printed, many consumers are also getting crafty with their photos, with 32% of the respondents creating scrapbooks or photo books, and one quarter using their prints to decorate their homes.”

Following are some of the primary trends the study revealed.

Camera Confessions: 2016 Photography Trends
•    Count it out! One in four (24%) consumers are taking up to 300 photos per month.
•    Pets, family and events really rate. We’re a nation of animal lovers, with more than half (59%) taking more photos of their pets than selfies (57%). Almost two-thirds (64%) reported taking photos of their family and special occasions more than anything else.
•    Memorable moments matter. The majority (80%) of respondents are capturing photos during family gatherings and holidays, like Memorial Day, Thanksgiving, Christmas and Hanukkah. Interestingly, photos at the gym are only taken by 16% of consumers.
•    Video is hotter than ever. More consumers are using their cameras for capturing video. Almost one in five (17%) are using their cameras to create content to be used online. “Velfies” (video selfies) are also gaining popularity—half of consumers (50%) are using their cameras to capture video of themselves.

An Increased Appetite for Food Photography

Another area of growing popularity among consumers is food photography. According to Canon, more than 178 million photographs on Instagram are tagged with #food. “More than half of consumers (55%) take food photos to show off a personal creation or new recipe. And 27% of consumers admit they share photos of food to brag and give friends FOMO (Fear Of Missing Out).”

And when it comes to food photography, America is a nation of true patriots. “Almost half (43%) confirmed that American cuisine inspires most of their food photography, with Italian cuisine coming in second place (22%), and Japanese and Chinese in third (9%) and fourth (7%).”

The study also found that at 51%, the most popular foods to be photographed are decadent ice cream dishes. Pizza and pasta are close behind as photo favorite dishes at 44% and 42%, respectively).

The Canon 2016 Photography Trends Study was conducted online with 1,004 adult U.S. general population respondents. The survey was conducted by Toluna, between the dates of April 21–26, 2016. usa.canon.com 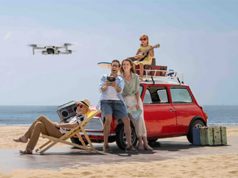 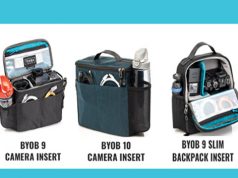