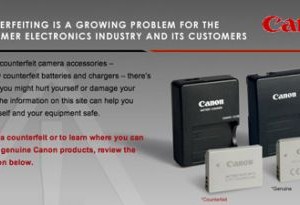 “Most American consumers are unaware of the full risks associated with these potentially dangerous devices. Four in 10 of the U.S. consumers surveyed don’t know counterfeit consumer electronics can harm them, and this lack of awareness leads to what Canon calls a ‘Confidence Trap’,” said Chuck Westfall, technical advisor, Professional Engineering & Solutions, Canon USA, Inc. “Based on the survey, consumers seem overconfident in their ability to spot a fake, and as a result, are at risk of possible harm.”

Further, the study revealed, “overconfident in their abilities, a significant proportion of consumers surveyed fell victim to counterfeit purchases, largely unaware that they could be putting themselves at risk of inferior product performance.”

“One of the most significant revelations of this anti-counterfeit study is our obligation to take action and educate consumers about the potential health and safety risks of counterfeit consumer electronics,” added Westfall. “This research indicates that education can largely impact perceptions of counterfeit consumer electronics, and steer consumers away from making uninformed and misguided purchases. After learning about the facts, 71% of the U.S. consumers surveyed said that they were less likely to buy them.”