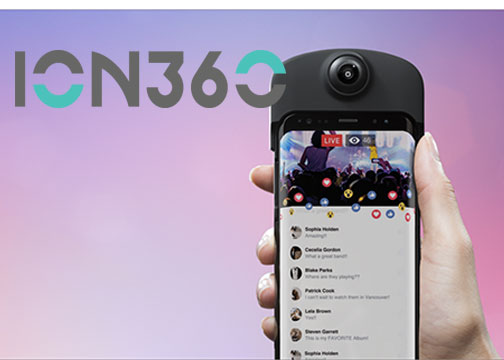 Indianapolis, IN—Designed to capture and share every angle of a story in 360º photo and video, the ION360 U camera was unveiled at the 2017 Billboard Music Awards on May 21. Fans were immersed inside the scenes at the awards show through live and exclusive content captured by the camera.

Instead of seeing into a static moment, ION360 U is built to bring people into that moment. The device allows people to instantly share a 360º view of a scene or live stream it to friends or family through social media platforms.

ION360 U snaps onto a smartphone to capture 360º, 8 megapixel images as well as 4K video with one touch. The device transforms a phone into a 360º camera with integration of hardware and software. Neither syncing nor downloading of content is required. And consumers don’t have to change the way the phone is used.

In addition ION360 U charges and supplies power to a camera and smartphone. The device includes a built-in phone-charging battery case that also protects phones against scratches and scratches.

Users can capture expanded panoramic views, share spontaneous images or live stream via the ION360 app that automatically launches. The device provides “quick and immersive stitching,” the company announced. The new mobile device is also able to record 4K video for up to two hours.

Compatible with most current phones, including the iPhone 7/7 Plus and Samsung Galaxy S8/S8 Plus, ION360 U will be available in mid-July 2017. It will be offered in two color options: gray and teal.

Preorders are currently being taken for a limited time offer of $100 off and free shipping nationwide. After that time, the device will retail for $349.

ION360 U at the Billboard Awards

As the exclusive 360º-capable camera sponsor of the 2017 Billboard Music Awards on May 21, ION360 U was featured among musicians and influencers on the red carpet and during the show. Influencers captured 360º photos and videos with the device to bring fans inside the scenes. ION360 also presented the award for the Top Social Artist.

Two television spots for the device also aired on ABC during the show. The ads highlighted the device’s capabilities filmed with the ION360 U in a variety of settings. ion360.com