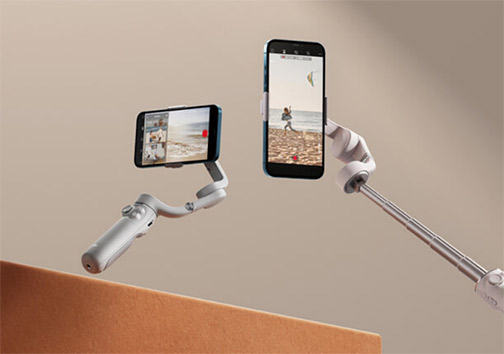 Los Angeles, CA—DJI launched the DJI OM 5, an easy-to-operate solution to help users elevate their smartphone content creation. The latest addition to the Osmo Mobile series, the DJI OM 5 smartphone stabilizer was upgraded with a new phone clamp as well as a compact design with a built-in extension rod.

“With the iterations of the DJI OM smartphone stabilizers over the years, we have been aiming to lower the threshold of professional and high-quality shooting by offering users more accessible and helpful tools for their everyday activities,” said Paul Pan, Senior Product Line Manager at DJI. “For those who rely on their smartphones, the DJI OM 5 is your ultimate compact, technologically advanced gimbal – any time you want to create footage of your most memorable moments.”

The stabilizer sports DJI’s foldable design; it also packs 3-axis gimbal technology into a portable, compact body that’s one-third smaller than its predecessor. Moreover, palm-sized when folded, the device features a newly designed clamp that goes over the smartphone’s case. As a result, it provides better protection. It is also compatible with more smartphone models than its predecessor.

In addition, the DJI OM 5’s built-in extension rod enables more angles and shooting possibilities for content creation. Furthermore, by adding one more button to the handle, users can control the core features and functions of the device more easily.

What’s more, its 3-axis stabilization technology fully supports walking and sports scenarios. And those who are new to videography can benefit from its ShotGuides feature. It provides 30 sets of preset shooting tutorials and supports automatic editing into one polished video.

Furthermore, the newly updated ActiveTrack 4.0 now supports tracking at up to 3x zoom at 5 m/s. According to DJI, it “precisely identifies and steadily follows the subject centered in frame, even while in action.”

Other features and preprogrammed shooting modes include Gesture Control. Users can start and stop video recording or take photos by using hand gestures to control the device. Moreover, DynamicZoom provides a visually appealing cinematic look. The device will automatically adjust the zoom function to create the dramatic background shift made popular by Alfred Hitchcock.

In addition, users can show the passing of time in a sped-up form using Timelapse; Motionlapse, which adds set movement points for the gimbal; or Hyperlapse to physically move with the gimbal. All three modes use electronic image stabilization (EIS) technology as well as the 3-axis gimbal for an added level of smoothness.

What’s more, users can choose from three creative panorama options to capture a wider perspective. They comprise 3×3 panorama, 240° panorama and CloneMe panorama. The latter allows the user to add multiple versions of a person or subject into one shot.

Other functions include story mode templates. The OM 5 uses preset movements, music and color palettes to add a creative spin to quick videos. It also supports automatic retouching and customized parameter settings via Glamour Effects, which automatically activates when switching to the front-facing camera.

In addition, DJI’s new fill light phone clamp accessory is a magnetic clamp with a built-in auxiliary light. It adds a glow to photos and videos.

The DJI OM 5 has a suggested retail price of $159; the price includes a magnetic clamp, tripod, power cable, wrist strap and storage pouch. The fill light phone clamp is sold separately for $59; it will release at a later date.