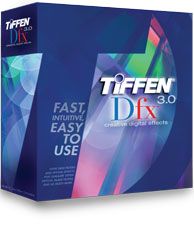 New capabilities include: Color Shadow, which creates a high-contrast image overlaid with a gradient, simulating the look and feel of those colorful iPod commercials; DeBand for blue skies, for instance, removing banding artifacts by smoothing pixels in banded areas while retaining detail; DeBlock, to remove blocking artifacts created as a result of high-compression factors; and DeNois, which removes the grain and noise while still retaining detail.

Other creative features include: Film Stocks, which simulates 113 color and black-and-white photo film stocks, including simulations of Kodak, Fujifilm, Agfa, Polaroid, and Ilford films; Glow Dark, which glows and grows the dark areas of an image, creating a stylized, dreamy dark glow; Key Light, to relight images with a directional or point light as well as create lighting effects; Rays, which creates realistic light ray effects like adding shafts of light streaming through clouds, beams of light on a foggy night or rays shooting through an interior window; Texture, to apply textures to an image; and Match, which matches the color, detail, grain and tone of one image and applies it to another. tiffen.com