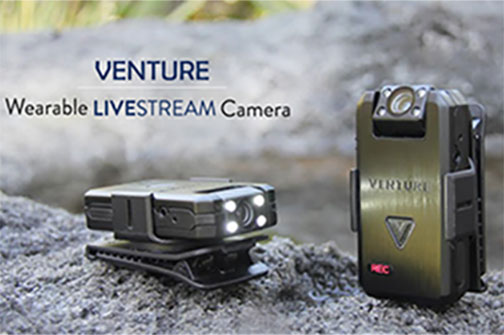 Los Angeles, CA—Wolfcom, a provider of law enforcement body cams, diversified its lineup with the Wolfcom Venture. The wearable, 4-in-1 HD camera features a rotatable camera head and a multifunctional, clippable design. As a result, it can be used as a body cam, a mountable car cam, a flashlight cam using its four LEDs and a live stream camera.

With 2.5 hours of battery life, it’s geared for live streaming to Facebook Live and YouTube Live from anywhere, anytime. In addition, with an optional battery pack, Venture will record for up to 23 hours.

“With Facebook and YouTube Live becoming very popular across all generations, we designed Venture to be the world’s first wearable, live stream camera designed for everyone,” said Peter Austin Onruang, founder and president, Wolfcom. “With Venture, anyone can be a star. It’s like having your very own broadcasting studio wherever you go. Just clip the camera where you want, then capture and stream from your point of view—it’s that easy.

“With Venture and all of its accessories, the options for photo and video capture (120º wide-angle lens with no fisheye effect) and sharing are endless,” he added.

Venture is made of aircraft-grade aluminum and is lightweight at 2.2 ounces. It features Full HD 1080p video capture at 30 frames per sec, as well as 720p HD; photo capture at 5, 12 and 16 megapixels; a 120º wide-angle lens; and a memory card slot. It also provides a built-in microphone, one-touch recording and date/time stamp.

The camera can be combined with additional POV (point of view) cameras, such as the Eye Vision, Covert Pinhole Button, Night Vision and Headset. This allows the audience to have the same perspective of the user, which is key in recording in-the-moment activities such as mountain biking and snowboarding.

When one of the secondary POV cameras is connected to Venture, the unit’s proprietary Critical Reconnect technology will prevent any missed footage. If the second camera’s connection to the Venture is lost, recording will continue.

Moreover, by using Venture’s intuitive mobile app, users can record and live stream video directly via a Wi-Fi connection to their smartphone. Live video is then streamed using the phone’s 4G/LTE connection. They can also grant friends private access to their stream.

The app also acts as a wireless remote control to record video and take photos. Additionally, Venture users can use the remote access feature from the app and program Venture as a wireless security camera to remotely monitor their home.

An Indiegogo campaign (igg.me/at/venturecamera) offers super early bird specials of $149 (60% off retail) and other rewards for early backers. The campaign has a funding goal of $25,000.

Wolfcom was founded in 2001. In 17 years has evolved from a security surveillance company to a manufacturer and supplier of body-worn camera equipment for law enforcement.

In 2012, the company introduced the first multipurpose police body camera. It had more than 26 “first in the industry” features and functions. Wolfcom has made INC. 5000’s list of America’s Fastest Growing Companies two years in a row (2015 and 2016). wolfcomusa.com 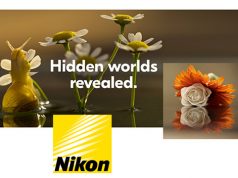 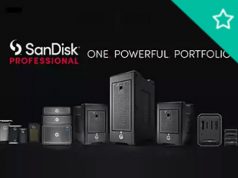