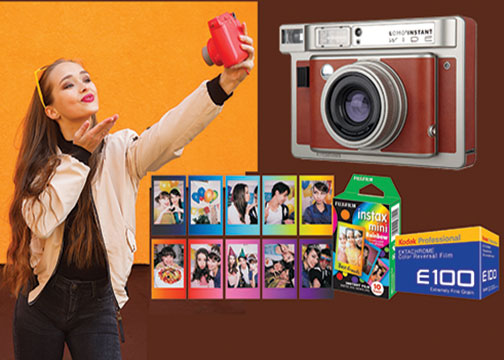 Film photography is alive and well in the digital age. While it’s hardly poised to take over, it’s a robust retro imaging niche that’s been expanding at an annual rate of about 5% over the past few years—providing a wealth of opportunities for photo specialty retailers.

The demographics are compelling. More than 75% of people who say they shot their first roll of film in the last two or three years are members of the millennial and gen Z generations, which bodes well for the future. These are committed young folks who see traditional photography as a unique means of personal expression. Rather than being put off by the “inconvenience” of film, they relish the idea of being more involved in the process. Eschewing instant gratification, they see themselves as part of a venerable tradition.

In addition, they’re largely responsible for the renewed interest in black-and-white film and printing, the upsurge in sales (and prices!) in the used film camera market, and the uptick of darkroom equipment as well as high-end film scanner sales. They also are spurring the sales of contemporary film cameras, ranging from low-end 35mm, roll film and pinhole cameras to high-end rangefinder 35s and SLRs.

Kodak’s impressive lineup of color negative films includes Kodak Professional Portra, which is available in speeds of ISO 100, 160, 400 and 800. Also offered are Kodak GC Ultra Max 400, Kodak Gold 200 and Kodak Gold 400, all but the latter available in 35mm and 120 rolls.

However, the biggest news from Kodak is the forthcoming commercial release of its esteemed Ektachrome E100 color reversal (slide) film. Slated for later this year, small quantities of this upgraded film were expected in 2017 but never materialized. We’re now assured by insiders that the project is definitely on track and the film should be on the market in 35mm 36-exposure rolls shortly.

Ilford Photo is known as the king of black-and-white imaging. Moreover, their excellent portfolio of silver halide monochrome films ranges from the classic superfine-grained ISO 50 Pan F Plus to superspeed Delta 3200 Professional. In addition, Ilford FP4 Plus (ISO 125), HP5 Plus (ISO 400) and Delta 100 and 400 Professional films are in between.

llford also offers SFX 200, a film with extended red sensitivity that gives an infrared (IR) look when shot through a deep red filter. Moreover, its XP-2 Super is a chromogenic ISO 400 film that’s processed in C-41 color chemistry. All are offered in 35mm cartridges and 120 rolls.

Another fun silver halide product pinhole fans are experimenting with is Ilford Harman Direct Positive fiber-based (FB) paper. The FB paper yields a positive print directly without a negative. It comes in glossy or luster surfaces in sizes from 4×5 to 11×14 inches.

Fujifilm is best known among serious and pro shooters for its superb Fujichrome transparency and slide films. Fujichrome Velvi

The company is also the world’s leading producer of instant picture films under the Instax label. Instax films include our fun favorite—ISO 800 Instax mini rainbow for Fujifilm Instax and compatible cameras. Its credit-card-size prints have colorful rainbow-hued frames.

And Yet More Film

We can’t detail every film offered by other brands in this article, but here are a few cool ones.

Foma Retropan 320 Soft. A panchromatic ISO 320 B&W film from Foma, it comes in 35mm and sheet film sizes. It yields “softer, milder contrast values” for a retro look that’s ideal for still life, architectural, landscape and portrait photography. It can be processed in standard chemistry but works best with Retro Special Developer. Moreover, it can be exposed at ISO 160–1250.

Rollei Infrared. An IR-sensitive ISO 400 black-and-white negative film, it has infrared sensitivity up to 820 nm. It can be exposed without filtration and also yields striking halation effects with longer exposures. It’s claimed to have very wide exposure latitude, fine grain, sharpness and good contrast. Its archival LE-500 base has a projected life of 500 years. This film from Rollei comes in 35mm as well as 120 rolls.

Instant picture cameras have experienced an amazing revival that’s accelerating. Combining the instant gratification of a digital camera with a physical print, they appeal to demographics ranging from kids to seniors, from family memory keepers to creative pros.

Key players like Fujifilm, Kodak, Polaroid, Polaroid Originals, MiNT Camera, Lomography and even Leica have responded by offering a welter of fascinating models. They range from basic and cute to sophisticated and retro. Here are five models that caught our attention.

As its name suggests, this sleek Fujifilm compact camera captures images digitally on a 1,920×1,920-resolution, ¼-inch CMOS sensor. It prints them out instantly in 2.4×2.4 size on 3.4×2.8-inch sheets of Instax Square instant film.

Furthermore, it stores them for future use on a microSD/SDHC card. A 3-inch, 460K-dot LCD is used for viewing and composition, and the 28.5mm-equivalent lens gets down to 3.9 inches. Other features include dual left- and right-hand shutter release buttons, a built-in electronic flash, filter effects and a +/- 1.6-EV brightness control.

If this new camera from MiNT looks familiar that’s because it’s an updated version of Polaroid’s SX70 folding instant picture SLR, in snazzy black with chrome accents and gold trim. An external time machine module provides full control of the shutter speeds. In addition, two auto modes allow use of A600 (600-type) or SX70 type film packs, both with built-in batteries.

Other features include: eye-level SLR focusing with a split-image rangefinder circle; a 116mm f/8 normal lens; revamped electronics with an electric eye exposure system; and a brightness control wheel for exposure adjustments.

This ingenious, pocketable Kodak P&S is a 10MP digital camera with an 8mm f/2 lens that captures images on a microSD card and prints out borderless 2×3-inch prints directly from the camera on ZINK (zero ink) paper.

The camera has an optical viewfinder, a built-in flash and built-in autofocus. In addition, there are indicators for low battery, low paper and low card storage. Offered in five colors, a rechargeable Li-ion battery provides its power.

This stylish camera from Lomography works with Fujifilm instant wide film and combines quality craftsmanship with versatile features. It offers autoexposure, unlimited long and multiple exposures, flash on/off control and lens attachments. It also has a PC sync socket for everything from single flashes to studio flash kits.

Polaroid Originals launched with a commitment to analog photograph—and the OneStep 2 camera. Inspired by Polaroid’s 1977 OneStep, the new instant film camera is as simple to use as the original yet incorporates modern features.

These features include a more precise, aspheric lens; a powerful flash; a built-in USB-rechargeable battery with a 60-day life; and a self-timer function. Compatible with 600 and i-Type film, the retro OneStep 2 is available in white or graphite.

There are iconic classics like the Leica MP and M-A, the Voigtlander Bessa-R2M and the Nikon F6, last of the great Nikon 35mm SLRs. Moreover, high-end specialty cameras include the Linhof 6x9cm Technikardan 23S and dozens of 4×5 and 8×10 view cameras. Many of them are available on special order, made by such venerable companies as Arca-Swiss, Linhof, Toyo and Wista.

While unit sales figures are modest compared to their digital counterparts, the fact that they exist is a testament to photographers’ enduring passion for analog photography. Here are three fascinating new film cameras.

Grasp the Spinner in your left hand, pull the cord with the ring on its end and release it quickly. The camera spins one full turn “in a split second” and records a panoramic image that’s 4x longer than a conventional landscape picture.

The device is powered by a rubber band (!), so no batteries are needed. It creates eight full panoramas on a standard 35mm 36-exposure cartridge. The fixed focus 25mm lens has two aperture settings—f/8 for cloudy and f/16 for sunny—and also two rotation speeds, 1/125 and 1/250 sec. In low light, users can release the cord slowly or turn it by hand to manually adjust the exposure. Awesome!

This medium-format camera looks like a cross between a classic Polaroid and a 1950 roll film folder. It is neither. Basically, it’s a zone-focusing medium-format folding camera that shoots 6×12, 6x and 6x6cm formats on 120 film. In addition, an interchangeable back allows shooters to make 12 panoramic images measuring 33x104mm per 36-exposure roll of 35mm film. It provides autoexposure via an electronically controlled shutter, has a bulb setting and provides multi-exposure capability.

Designed with Walker Cameras in the UK, this lens-less camera folds flat for transport. Like all pinhole cameras, it requires long exposures on film or paper and also captures images with limitless depth of field.

The Titan takes standard 4×5-sheet film holders and comes with a 72mm f/206 wide-angle cone (optional 110 and 150mm cones are available). In addition, it is robustly constructed of injection-molded ABS with a nonslip coating and durable stainless-steel fittings. It features two spirit levels, two ¼x20 tripod sockets and a pinhole exposure calculator.

In addition, Fujifilm and Kodak are duking it out in the underwater one-time-use film camera arena. In one corner is the Fujifilm QuickSnap Waterproof 800 35mm camera kit. It consists of four cameras, each preloaded with 27 frames of Fuji Superia 800 color print film. They’re submersible to 35 feet, have fixed focus lenses, optical viewfinders and also wrist straps.

In the other corner is the Kodak Water & Sport waterproof 35mm disposable camera. Preloaded with 27 frames of ISO 800 Kodak Max Versatility Plus color print film, it has a “sunscreen smudge-resistant lens as well as a shockproof rubber shell. Specs state it’s waterproof down to 50 feet.