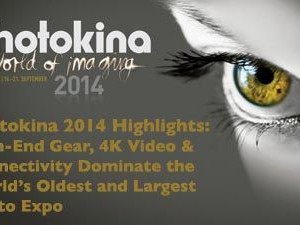 Anyone who wondered whether photokina, the biennial imaging exposition held in Cologne, Germany, is still the world’s greatest event of its kind, the outsize photokina 2014 surely dispelled any doubts.

Dating back to 1950, when the German photo industry was struggling to reestablish itself after WW II, its steadily expanding exhibition space now covers (depending on how you calculate it) the size of 12 to 14 football fields. Held September 16–21, this year’s event included magnificent picture exhibitions and a mind-boggling array of image-related equipment displayed by enterprises serving everyone from rank snapshooters to pros, videographers and industrial users.

If there was any overarching theme to this profusion of new and existing hardware, software and services, it is the pursuit by leading manufacturers of serious enthusiasts and professionals—perceived as the most reliable and profitable sector of the marketplace.

However, there were many other trends in evidence: the rise of the mirrorless compact system camera (CSC) as a viable choice for professionals as well as camera buffs; the almost universal adoption of 4K as the video standard for camcorders and interchangeable-lens cameras at all price points; and the emergence of Wi-Fi and NFC as must-have features in DSLRs, CSCs, camcorders and point-and-shoot cameras. Indeed, the incorporation of key smartphone features into digital cameras is a classic case of “if you can’t beat ’em joint ’em.” It’s not just connectivity that rules the day, but seamless, intuitive, instant connectivity that allows consumers to upload and share images instantaneously and view, control and fire their cameras remotely using smart devices.

Although it is impossible for a single individual (even me) to provide truly comprehensive coverage of a show as massive as photokina 2014, I’ll do my best to give you a good overview of what I found to be most significant and fascinating.

DSLRs: Nikon and Canon Take the Evolutionary Approach
The Canon EOS 7D Mark II looks and feels very much like its successful and long-lived predecessor, the 7D, but it has been made more attractive by adding several tech upgrades. These include: a 20.2MP CMOS sensor; dual Digic 6 image processors that get the maximum burst rate to an impressive 10 fps; Dual Pixel AF technology with live view; a 65-point, all-cross-field AF system for enhanced performance; and built-in GPS with a digital compass. And it still retains such key features as a robust, weather-sealed magnesium alloy body and a really great optical viewfinder. Many called it the “Canon EOS 5D Mark III Lite,” but whatever you call it, it’s a great refresh and should be a real contender.

The full-frame Nikon D750 falls in between the Nikon D610 and D810, with a 24.3MP FX-format sensor and a high-density, 51-point AF system derived from the flagship D4S. Other attractions include: a 6.5-fps, full-res maximum burst rate; group-area AF for superior focusing and tracking accuracy with action subjects; and ISO settings to 51,200. Its newly developed sensor and Expeed 4 processor are said to provide enhanced low-light performance. The D750 also has a cool, tilting 3.2-inch monitor with a three-axis hinged design that lets you raise it up to 90º and down to 75º. Significantly, it’s Nikon’s first FX-format camera with built-in Wi-Fi for transferring images and remote shooting using smart devices. Well done, and likely to succeed even in this competitive market segment.

Mirrorless CSCs: DSLR Functionality, Custom Finishes, Exciting Form Factors
The Fujifilm X-T1 APS-C-format, DSLR-styled compact system contender gets an elegant graphite silver finish applied by treating its magnesium body with an antioxidant, adding a wear-resistant, triple-layer coating and finishing it off with a clear coat. It’s gorgeous, but internally much remains the same, including the large OLED EVF with instant image preview, the latest generation 16.3MP APS-C X-Trans CMOS II sensor and a focusing speed of a mere 0.08 sec. Plus, the XT-1 graphite silver edition has a high-speed 1/32,000-sec electronic shutter, and it can be set in 1/3-EV increments when using the high-speed Fujinon XF23mm f/1.4 R or XF56mm f/1.2 APD prime lenses.

Over at Samsung’s booth, the Smart NX1, a sleek top-of-the-line NX-mount model technically released just before photokina, was a hit of the show. It offers a combination of understated DSLR styling plus impressive enthusiast-aimed features. Its specs include: a 28.2MP APS-C-format CMOS sensor coupled to an advanced DRIMe V image processor; a 3.0-inch, 1,036K-dot AMOLED tilt/touch monitor; and a 2,360K-dot OLED EVF. It can capture 4K video at 24 fps, UHD video at 30 fps and delivers a top full-res burst rate of 15 fps with AF. It was shown with Samsung’s exciting new 50–150mm (75–225mm equivalent) constant-aperture f/2.8 OIS zoom.

My favorite, however, is the diminutive Lumix DMC-GM5, claimed to be the world’s smallest CSC with an EVF. Its retro-style body measures only 5.3×2.7×0.8 inches and it weighs a mere 7.2 ounces complete with battery, UIM card and microSD memory card! Despite its small size, this elegant jewel features: a 20.1MP, 1-inch High Sensitivity 16MP MOS sensor; a giant 4.7-inch, 6,220K-dot, touch-screen LCD with a 3.0-inch viewing area; and a 1,166K-dot LVF (live viewfinder). It includes Wi-Fi connectivity for easy sharing and remote camera operation, D-range lighting control, Full HD 1080p video capture in AVCHD or MP4 formats with stereo sound, a top shutter speed of 1/16,000 sec, and a data throughput rate of a blistering 240 fps.

Pentax 645Z: Full HD Movies in Medium Format
The Pentax 645Z looks very much like the classic Pentax 645D, but its sexy new silver-framed Pentax logo is a clue that something is different. To begin with, the Z has a new 51.4MP CMOS sensor that noticeably upgrades its image-quality potential. And this 43.8×32.8mm sensor has no image-degrading antialiasing filter. An enlarged memory buffer enhances responsiveness, especially when shooting in continuous mode, and the Z is the first Pentax 645 that shoots Full HD 1080p movies. Video quality is said to be spectacular, and it has a built-in stereo microphone, an external mike jack, can create interpolated 4K interval movies and delivers an ultra-high ISO setting of 204,800. It’s also compatible with Flucards and is equipped with a wireless LAN function to provide easy sharing as well as wireless camera control using a smartphone or similar device.

Zeiss showed an advanced 35mm f/1.4 Distagon in M mount for Leica M and other M-mount rangefinder owners. The new 10-element, 7-group 35mm f/1.4 Zeiss Distagon uses an aspheric optical surface, special anomalous dispersion glass and a floating-element design to achieve a level of perfection claimed to be equal to or even a tad better than the legendary 35mm f/1.4 Summilux-M Asph. The kicker: It will retail for substantially less than the Summilux, and like all f/1.4 lenses it makes it easy to create beautiful pictorial effects when shooting at wide apertures.

Sigma introduced two versions of the Sigma full-frame 150–600mm f/5–6.3 DG OS HSM lenses, evidently in response to the popularity of the Tamron 150–600mm with similar specs. The heavier, slightly larger Sports version has a hypersonic motor (HSM), two FLD and three SLD elements for enhanced correction, an optical stabilizer with accelerometer, and a splash- and dustproof mount. It measures 4.8×11.4 inches, weighs 6.3 pounds and features 24-element, 16-group construction. The Contemporary version of the lens has 20-element, 14-group construction, one FLD and three SLD elements, measures 4.1×10.2 inches and is somewhat lighter than the Sports version. It is presumably less expensive to go head-to-head with the Tamron.

Off The Wall: There’s Always Something Weird at photokina
The wearable Elmo QBiC MS-1 bears no relation to the cuddly, tickle-prone Muppet of the same name. It’s a creation of Elmo, the esteemed motion picture projector manufacturing company based in Nagoya, Japan. Basically, this mind-bending concept consists of four of the company’s mini wide-angle digital cameras fused together at fixed angles so they shoot in four directions at once.

The captured images can be stitched into wild-looking panorama-like stills or videos that you can move through much like a 360º panoramic image. Each IPX4 camera component measures 2.1×2.4×1.6 inches. Its fixed-focus f/2.0 lens covers a diagonal angle of 185º and is in sharp focus from 2cm to infinity, providing almost infinite possibilities for creativity. It can shoot 5MP stills and Full HD video, has built-in Wi-Fi, interval recording capability and burst modes. Its lithium polymer battery recharges in about three hours. The QBiC MS-1 is currently offered in Europe at around 1,000 Euros; chances are it’ll be less expensive when it reaches our shores. If anything can capture four-dimensional effects in three dimensions, this is probably it.

GoPro waited until after photokina to announce their new GoPro Hero4 camera, but they sure made visitors to their booth howl with laughter when they displayed the Fetch. A pet mount for GoPro cameras, it was affixed to a hapless stuffed toy dog that looked like a substandard Golden Retriever on a bad day.

The Fetch is a harness-like device, and Jim Geduldick, GoPro’s Camera & Photo marketing manager, couldn’t help smiling as he held up the fake pooch and explained its top-mounting and over-the-neck mounting possibilities. Actually, when you consider that many dogs accompany their owners wherever they go, the idea of mounting a GoPro on your dog is not crazy at all. It may actually have life-saving applications for first responders who can, with Wi-Fi, get a remote view of dangerous or inaccessible places. Maybe I’ll get one and mount a new GoPro Hero4 on my pet iguana.