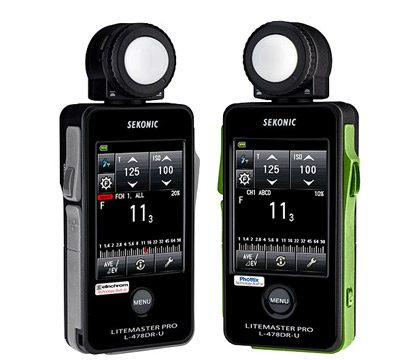 Both use Sekonic’s DTS (Data Transfer Software) system that automates meter calibration to the camera in use. It also has expanded cine features. And each meter features a signature-color rubber surround and name badge for the flash brand it controls.

Sekonic LiteMaster Pro L-478 meters are compact, with a 2.7-inch color LCD touch-screen. The LCD displays ambient, flash, cine and other information. Users can select settings by touching or sliding a finger over the touch screen.

The power screen of the L-478DR-U-EL enables separate selection of any of the four lighting groups, 1, 2, 3, 4, for flash brightness adjustment in 0.1 increments by tapping buttons on the touch screen. The F-number value for the light being measured appears in a central area on the screen as well as over the respective group selection button. The measured value for each group is maintained as a visual record of the brightness difference of the lights in use, so that lighting ratios can be easily determined.

Once the flash adjustment is made for each group, all the flashes can be triggered for a total reading for exposure. The L-478DR-U-EL can also be used to measure and adjust the modeling light brightness of Elinchrom flashes for cine/video lighting.

The L-478DR-U-PX flash control screen allows selection of a single group or a combination of groups for flash brightness measurement. The F-number value for the light being measured appears in the center of the screen and above respective group selection buttons. Here, too, the measured value for each group is maintained as a visual record of the brightness difference of the lights.

The meter’s group selection as well as triggering support Phottix flashes and radios that work with the Phottix Strato II protocol. These include flashes connected to the Strato and Strato II receivers as well as the Atlas II transceivers. In addition, compatible Phottix flashes include the Indra360, Indra500 and Mitros+ flashes designed for Canon, Nikon and Sony cameras.

Sekonic engineers continuously add operational improvements requested by current owners. Among them are the inclusion of ISO 850 for Canon cinema video cameras. Moreover, there is an expansion of the filter compensation from 5 EV to 12 EV. This is to aid landscape photographers who use ND filters. Furthermore, these and other small operational improvements will be available as a firmware upgrade for current owners via the latest Data Transfer Software version 5.0. sekonic.com