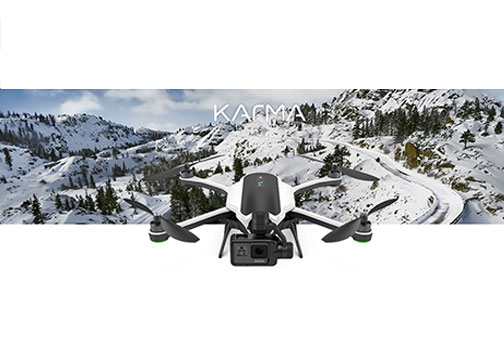 San Mateo, CA—Featuring a redesigned battery latch, GoPro’s Karma drone is back on shelves. “Karma is the ultimate aerial, handheld and wearable stabilization solution for the GoPro community,” said Nick Woodman, GoPro founder and CEO. “As the consumer drone market continues to grow, Karma delivers the most versatile solution at a very accessible price.”

The drone system includes the compact and foldable Karma drone that fits in a dedicated backpack along with the Karma grip—a a 3-axis camera stabilizer that can be handheld, mounted or worn. The Karma drone and Karma grip are both designed to capture shake-free, smooth video.

In November 2016, the company had to make the difficult decision to voluntarily withdraw Karma from the market. “Safety is our biggest priority, so this decision came after we learned that a small number of Karma units were experiencing power loss mid-flight. We knew we had to move quickly. Really, it was an easy decision but difficult news to share. So the new battery latch allows you to return to your regularly programmed dronies without worry,” added Woodman.

In addition, its game-style controller features an integrated touch display, to make it fast and easy to fly without the need for a separate phone or tablet to see what the drone sees. Pilots can also invite friends to fly along using the GoPro Passenger app.

Separately available harnesses make Karma compatible with Hero5 Session as well as Hero4 Black and Silver action cameras. Karma retails for $799.99, or $1,099.99 bundled with the Hero5 Black cam. GoPro is also working on a Flight kit for users who purchased the Karma Grip alone. gopro.com