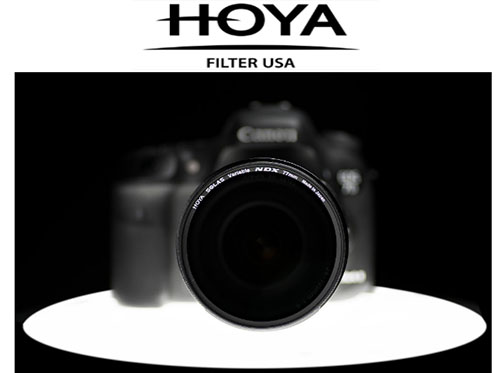 Las Vegas, NV—The engineers at Hoya developed a premium variable neutral density filter that’s engineered to be sharp, glare-free and maintain consistent color throughout the density range. The Hoya Solas NDX has a density range of 1.3 stops to 8.7 stops.

To achieve this, it utilizes premium glass, polarizing films, multi-coatings and a special “depolarization” layer to create a tool for photographers and filmmakers. The Solas NDX uses super-thin optical-grade polarizing films. In addition, it employs multiple layers of Hoya’s patented multi-coatings on each of the four sides of high-grade glass.

Variable neutral density filters are convenient tools for filmmakers and photographers. This is because they reduce the need to carry many ND filters. Moreover, they allow users to precisely control the amount of light passing through the lens by rotating the outer ring for greater creative control over exposure. For filmmakers, this means shutter speeds that match a specific frame rate while maintaining the desired depth of field. For photographers, it means they can reach longer exposures or achieve a shallow depth of field in bright sunlight.

However, all neutral density filters, straight and variable, “color shift.” Some are almost imperceptible while others are so bad they are nearly impossible to correct in post-processing. Almost all variable ND filters color shift inconsistently throughout the density range, starting with a green/cyan shift at its brightest then shifting to magenta at its darkest, for example. This creates increased post-processing time for photographers and a color-grading nightmare for filmmakers.

As a result, the optimum variable ND filter is one that starts with a near imperceptible color shift at its brightest density then maintains color consistency throughout the entire density range. Hoya’s solution is depolarization.

Depolarization is a special patented layer baked into the optical formula of the filter. It allows the filter to maintain consistent color from 1.3 stops to 8.7 stops. Using the Solas filter, filmmakers and photographers can tweak density as the light changes without fear of degrading color shifting. Photographers can focus, compose and set WB at 1.3 stops. They can then adjust density as much as 8.7 stops without having to change filters.

Furthermore, the Solas NDX is designed for sharpness and minimal glare. Employing two polarizing filters within one filter design creates the variable neutral density effect. Two pieces of glass and two layers of polarizing film create eight surfaces within the filter. As light passes through a low-quality filter, it bounces around those eight layers, degrading sharpness, contrast and clarity. To avoid this, the Solas NDX uses high-quality optical glass, super-thin optical grade polarizing films and multiple layers of Hoya’s patented multi-coatings on each of the four sides of glass.

In addition, the unwanted “X” pattern that creeps into images as the user rotates the filter is inherent in all variable neutral density filters and cannot be avoided. The ”X” pattern is an inconsistent distribution of density across the frame where corners are either under- or overexposed. Lens focal length, sensor size and optical design play roles in determining when this cross polarization becomes visible. Wider lenses will see the pattern occur earlier. Longer focal lengths will take advantage of the filter’s density range.

“In our real-world test we have determined that a 28mm (full-frame) lens is the widest focal length lens we can recommend be used with this filter,” notes Hoya. “Wider focal lengths will work. But they have such a limited density range that is does not make practical sense to use it. We highly recommend shooters that use wider lenses use straight neutral density filters like the Solas IRND filters.”

The Solas variable NDX filter is only available in 77mm and 82mm. This is because these sizes allow for the greatest amount of precise density control. The “throw” or rotation is greater than smaller filters so it is easier to achieve an exact density, adds Hoya. The filter also works on lenses with smaller filter threads by using an optional step-up ring (sold separately).

Moreover, the front filter threads accept additional filters and caps. As a result, photographers can use their lenses’ original lens caps or, if needed, most manufactures’ lens hoods. The lightweight aluminum filter frame sports front filter threads. Consequently, users can attach another filter when additional density or other special effects are needed.