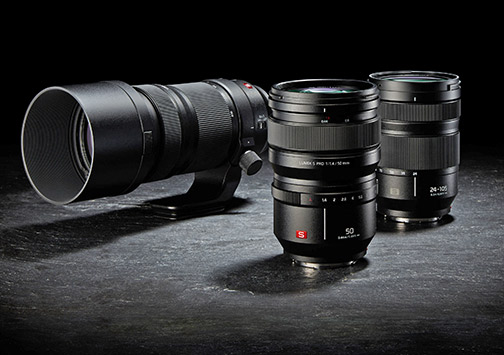 In addition to Panasonic’s existing portfolio of lenses for Lumix S cameras, the company is committed to designing and developing 11 or more lenses with emphasis on the Lumix S Pro class by March 2021. Currently, more than 46 interchangeable L-mount lenses are available or will be available from Panasonic, Leica Camera AG and Sigma.

The lens also adopts a double focus system to suppress fluctuation of aberration, even at close distances. Panasonic says it achieves “high-descriptive performance from the center to the corners over the entire zoom range despite its large aperture.”

Moreover, the use of a teleconverter allows 280mm (1.4x, with DMW-STC14) and 400mm (2x, DMW-STC20) super-telephoto shooting; while a maximum 480-fps focus control enables fast, precise autofocus. In addition, the OIS (optical image stabilizer) in the lens works with the camera’s body IS; the 5-axis dual IS 2 system makes it possible to use a 7-stop slower shutter speed. What’s more, a focus clutch mechanism enables instant AF/MF switching and manual focusing.

In addition, the lens’s constant f/2.8 large aperture provides smooth defocus gradation from the focus peak to the neighboring image area. This results in a bokeh effect as well as a rich perspective. Furthermore, the lens is also an option for video recording; it integrates a mechanism that suppresses focus breathing.

Other features include: a dust/splash-resistant body that can withstand harsh conditions, even at 14ºF; an 82mm filter size; and an 11-blade circular aperture diaphragm. The 70–200mm f/2.8 retails for $2,599.

It also achieves MTF performance despite its compact size and light weight. “It boasts stunningly high resolution toward the corners, even at wide open, as well as a beautiful bokeh, suppressing double line bokeh and vignetting,” Panasonic announced.

Moreover, a double-magnet linear motor is integrated for the AF actuator; it reaches a maximum 480-fps sensor drive. Like the 70–200mm f/2.8 OIS, this lens also employs a focus clutch mechanism as well as a mechanism to suppress focus breathing.