The Tough TG-870 is built to withstand extreme conditions: it is waterproof to depths of 50 feet, freezeproof to 14℉, shockproof from 7 feet, crushproof to 220 pounds of force and dustproof. Its 21–105mm f/3.5–5.7 zoom lens is geared for ultrawide group selfie shots. The TruePic VII image processor, the same one used in Olympus’s OM-D interchangeable-lens cameras, is paired with a 16 megapixel backlit CMOS sensor, to capture clear images with true colors, even underwater.

The TG-870’s LCD monitor has double the resolution of the previous model and is 1.1x brighter, to help users see more detail while shooting outdoors or underwater. The customizable button on the front of the camera can be programmed for several functions, including shutter release, video recording, monitor boost, LED assist and super macro mode. The TG-870 also detects the orientation in which it’s being held to assist the user in capturing selfies, point-of-view action video or over-under shots. 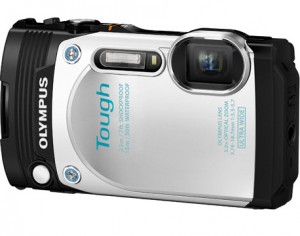 The Stylus Tough TG-870’s rugged construction can be further reinforced with the CSCH-124 silicone jacket, which shields the camera from surface damage. The CSCH-123 sport holder supports hands-free photography and video recording, so users can attach the camera to backpack straps or a chest harness during intensive activities. The PT-057 underwater case increases the camera’s underwater capability to 147 feet, and the UFL-3 underwater flash facilitates underwater flash photography. A second tripod base plate on the camera offers the added benefit of vertical mounting.

The Olympus Stylus Tough TG-870 will be available in April 2016 in gunmetal metallic, metallic green and white for $279.99. olympusamerica.com