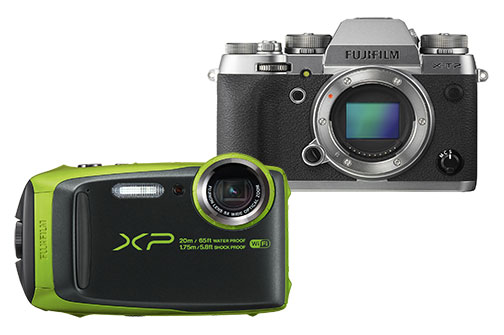 The FinePix XP120 is waterproof down to 65 feet, shockproof to withstand a fall of 5.7 feet, freezeproof to 14°F and dustproof. The point-and-shoot adventure camera is equipped with a Fujinon lens engineered to produce enhanced sharpness with unique color reproduction technology.

The Fujinon 5x optical zoom lens offers a 28mm wide-angle setting to help capture sweeping landscapes. The optical zoom range can be doubled to 10x with Intelligent Digital Zoom technology, while the camera’s optical image stabilization function is designed to ensure that effects from camera shake are minimized.

Compact and lightweight, the camera also has a 3-inch, 920K-dot LCD monitor with antireflective coating. The monitor inhibits light reflection so photographers are able to comfortably check composition and pictures taken under bright daylight or underwater.

In addition, the operation buttons on the XP120 were created for optimal size and position, to enable operation even while wearing gloves or holding with one hand.

The FinePix XP120 offers a new cinemagraph mode that produces still images with moving elements. Cinemagraph is a photographic approach that creates an image somewhere between a still and video, with an animated area that contrasts against the rest of the still image.

Additional features include: burst mode at up to 10 frames per sec; advanced burst mode at 60 fps; Full HD video recording at 60 fps with a wind filter; time-lapse recording, useful for fixed-point observation of scenes, such as flowers opening; a motion panorama 360° function; 11 artistic filters (7 for video); underwater and underwater macro functions; and interval timer shooting that can be set at various intervals from 15 seconds to 10 minutes.

The FinePix XP120 will be released in late February in four color options with a suggested retail price of $229.95.

The new X-Pro2 graphite edition adds an all-new color to the X-series lineup. The graphite edition has a metallic texture due to a specialty multilayer coating. This edition will include the compact, lightweight Fujinon XF23mm f/2 R WR lens and LH-XF35-2 lens hood in the same graphite color as the body.

The X-Pro2 graphite edition maintains the features of the current X-Pro2. The package will be released as the Fujifilm X-Pro2 Body with XF23mm f/2 R WR Lens and Lens Hood Kit, Graphite Edition, in late January for an SRP of $2,299.95.

Fujifilm also announced the X-T2 graphite silver edition camera, which will be supplied with tailor-made accessories. These will include a leather strap, an aluminum hot-shoe cover and a matching EF-X8 hot-shoe mount flash.

The X-T2 graphite silver edition is treated with a multilayer coating that is triple baked to produce a tactile finish. The first layer is a matte black undercoat applied to the magnesium top cover. This undercoat is used to deliver deeper blacks in shadow areas to make highlights stand out. The second layer uses Thin-film Multilayer Coating technology to apply graphite silver for a shiny, smooth finish. Additionally, the third layer is a clear varnish for a glossy finish.

The Fujifilm X-T2 graphite silver edition will also be released in late January. It has an SRP of $1,799.95. fujifilmusa.com