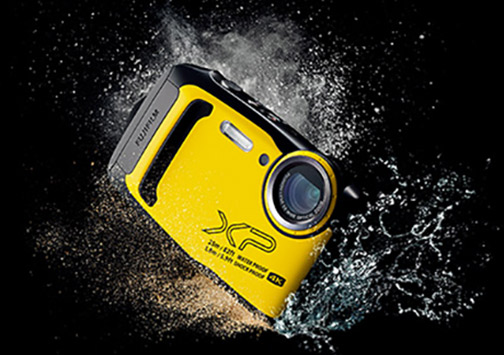 Las Vegas, NV—The Fujifilm FinePix XP140 is the latest rugged point-and-shoot compact camera in the company’s XP series. The new camera includes upgrades to the construction of former models in the XP series. As a result, the XP140 is waterproof to 82 feet, shockproof enough to survive a fall of 5.9 feet, freezeproof to 14°F and dustproof.

The adventureproof camera weighs in at 7.3 ounces for portability yet provides a host of imaging features. It incorporates Fujifilm’s color reproduction technology and 16.4 megapixel back-illuminated CMOS image sensor.

It is also equipped with a Fujinon 5x optical zoom, 28–140mm-equivalent lens with the zoom range starting from 28mm on the wide-angle side. Moreover, the XP140’s optical zoom range will reach up to 10x with Fujifilm’s Intelligent Digital Zoom technology.

The camera also has an optical image stabilization mechanism. And its output sensitivity goes as high as ISO 12,800 (a stop higher than the XP130 model) to produce sharp, noise-free images, even in low light conditions.

The XP140 also comes with variety of automatic functions for photographers of all skill levels. They include main subject recognition and an easy-to-use interface. With evolved scene recognition auto mode, the XP140 detects a main subject within a scene and automatically optimize the camera settings. In addition, its eye detection function helps to capture portraits by automatically focusing on the eyes of the subject.

A variety of other auto-intelligent functions are also provided. For instance, self-timer mode automatically releases the shutter when detecting a smiling face. The camera also features 17 variations of filters, including the new rich & fine and monochrome (NIR) effects. A unique live-view interface assists with these selections.

Furthermore, the XP140 offers ease of use during outdoor activities. It features a grip and a double-locking mechanism for the battery compartment. Other features include 15-frames-per-second burst shooting and 4K video recording.

Rounding out is features is Bluetooth connectivity, which allows automatic and instant image transfer to smartphones and tablet devices by paring registration. The technology also syncs the time and location information from a device and attaches it to images, as well as enables remote shooting function via application. To utilize this feature, users can download the free Fujifilm Camera Remote app to their smartphone or tablet device. Moreover, for Instax Share SP printer users, they can transfer images from the camera to an SP printer for quick printout.