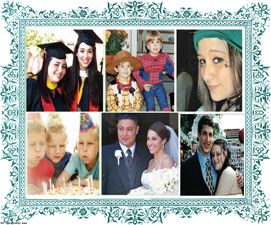 On May 4, 2012, I received an urgent text while I was teaching yoga class that my father had suffered a massive heart attack and was having quadruple bypass surgery.  My siblings and I raced to the hospital and spent every waking moment we had with my dad, next to his bedside.

It was a shock for several reasons; our 64-year-old pillar of strength was never sick. We hung up pictures of all his grandkids and told him stories about their lives, first soccer games, birthdays, etc.

He fought for 21 days, but in the end, he asked to be taken off of life support. We understood why; his quality of life would have been affected severely, leaving him unhappy. We respected his decision.

“You’re never prepared” is the saying you often hear when a death occurs, and how right that statement is. After my dad died, one of the first reflex reactions I had was to grab everything I could that reminded me of him, including his work boots, in which I remember hearing him gingerly step down the stairs every morning around 4:45 a.m. when I was younger.

I wanted to call his cell phone just to hear his voice again, and I wanted to find every photograph that either anyone or myself had ever taken of him. I didn’t want these photos just for me, but for my kids who are two and four years old and who will never remember knowing him.

So I do have photos of my dad when he was a baby, at his high school prom with my mom, in Vietnam, and his official service photo, which we always proudly display and will use at school on Veterans Day. I also have a picture of the Purple Heart he received, pictures of our camping trips growing up, at least a dozen pictures of him on his beloved Harley, and many mere snapshots of him in our daily lives as we were growing up. Each photo brings back feelings and memories that I realize have been lying dormant in me.

Our quality of life is what we all like to capture in our pictures, right? The human spirit captured via a lens at its best, worst and all stops in between. We desire to capture hope, empathy, love, even sadness as our emotions and feelings make us real people.

At 41 years old, my memory should be much better than it is. I cannot recall many of the experiences throughout my life unless I see photographs. For me, a picture can bring back memories and emotions that I’d shared with others. We are lucky to live in an age where our phone, computer and camera are all compiled into one little device that’s so small it fits into the palm of our hand, which makes taking photos so easy, accessible and convenient.

So capture as many moments as you can that you would never want to forget.

The milestones in our lives shape our human spirit; it’s when we find out who we are, what we are made of and perhaps who we are supposed to become, which is why it’s imperative to capture these moments.

Whether it be for a newborn baby, first crawls, first steps, first birthday, first day of ballet, first soccer or football game, first day of school, prom, graduation, first job, first love, an engagement or a wedding. These certain times that we value so much in our hearts deserve professional photos.

Everyone has milestones and sometimes reaching them can be a challenge, or unexpected for parents just as much as for their kids. Recently, I was given the great pleasure of photographing a child who has Asperger syndrome. The child’s mother had wanted her son photographed for some time, but hesitated because her little boy hated to be photographed and prior attempts at professional shoots hadn’t gone well.

It was apparent that the boy was anxious about the shoot. I observed him fussing with a stiff button-down shirt; a shirt he clearly didn’t like very much. As soon as his mom walked away, I asked the boy if he would rather take the shirt off, and sure enough, he said yes. His mom thought it best if she kept distant from the shoot, so it was just the two of us.

We talked about cars, school, trucks, television shows and more cars. Upon completion of the photo shoot, I asked him if he had fun, and without hesitation, he said yes. To me, that is a successful day.

The icing on the cake came when I showed his parents the photos from our shoot. At first, they were quiet, just looking at the screen, and I couldn’t tell how they felt. Sure enough, his mom was excited and said, “Wow! I didn’t think you’d get one good one. Keep going. I just want to see them all. He looks like a little man in these pictures, so grown up.”

His father zoned in on one picture and compared the photo to an album cover, and since both parents were happy, that made me happy.

To see the look of awe on a parent’s face is part of the gift of being a photographer. Families go through tough situations at times, and it can give comfort for them to see a glimpse of their child in a different light or from someone else’s perspective.

There’s sunshine in all of our spirits, and I work toward capturing that perfect moment in time to show off that inner spirit.