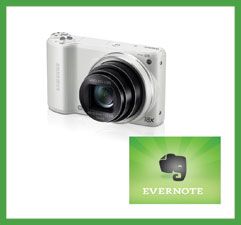 Ridgefield Park, NJ—Samsung has integrated Evernote into its WB250F Smart camera, coupling it with Samsung’s Smart Camera 2.0 technologies to give users a new way to capture and sync photos across any device that has Evernote installed.

The Evernote feature is now available to users in the United States via a software update to currently owned and newly purchased WB250F Smart cameras. The WB250F also comes with three months of the Evernote Premium service (a $15 value) that includes a higher upload allowance per month (up to 1GB), more sharing options and faster image processing.

“Consumers want to take great pictures that they can share with their family and friends,” said Ron Gazzola, vice president, Marketing, Digital Imaging. “With the addition of Evernote to Samsung’s WB250F, users can now seamlessly sync their images across devices and share their photo memories with other Evernote users.”

The Wi-Fi enabled Samsung Smart camera allows consumers to capture images and share them on social media sites or via e-mail when connected to a Wi-Fi network. The integration with Evernote is another way that the WB250F can help users do more with the photos they take. Using Evernote, they will be able to securely sync their photos to all of their personal devices that have the Evernote app installed, including their PCs, smartphones and tablets. From there, users can privately share their photos via Evernote.

Other key features of the 14.2 megapixel WB250F include a BSI CMOS sensor, 18x optical zoom, full manual (PSAM) modes, a best face function, smart mode and motion photo. With a touch-screen LCD and five-way navigational keys, users can adjust the WB250F to their preferences.

The Samsung WB250F is available in white, cobalt black, gun metal and red for $249.99. Newly purchased cameras will come with an Evernote Premium redemption code that entitles users to three months of Evernote Premium service, allowing them to upload up to 1GB of photos. samsung.com