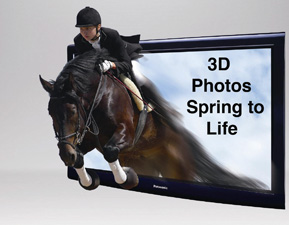 They say everything old is new again, but this time the 3D stereo craze of the 1950s—complete with special cameras, lenses and glasses—is coming to us on megapixel steroids! Instead of running around with 35mm Stereo Realists, Wollensaks and Kodak Stereo 35s, and peering through stereo viewers to marvel at their Kodachrome slides, consumers will be toting digital cameras like the Sony Cyber-shot DSC-TX100V. And in today’s digital world, you don’t even need a camera to add 3D to your family memories—software like Roxio Creator 2011 can do it for you.

The sleek 16 megapixel TX100V, the successor to the popular TX9, will hit store shelves in March with an MSRP of $379.99 to capture 3D scenic vistas in one “press and sweep” motion with its 3D sweep panorama mode. As shooters pan the camera with this mode selected, the camera records separate right-eye and left-eye images that are merged into a single 3D picture that will pop off of a 3D TV. The TX100V also has a new 3D still mode; when the photographer presses the shutter button once, a second reference image for depth is captured, then left-eye and right-eye images are created. This compact also offers SLR-type features, like Sony’s Exmor R CMOS sensor; a 4x 25mm wide zoom; a big 3.5-inch wide-touch OLED screen; Full HD 1080p AVCHD movie recording with dual record; 10-frames-per-second (fps) capture at full resolution; a background defocus function; “superior auto” mode with improved HDR capabilities; and USB charging. The “V” indicates GPS functionality as well.

For $100 less, Sony offers the stylish 16MP Cyber-shot DSC-WX10, which also has 3D Sweep Panorama and 3D still modes but uses a 2.8-inch LCD. It, too, provides a full range of 2D bells and whistles, including 1080i HD video recording with dual record. sony.com

Perhaps the most advanced compact 3D digital camera on the market is Fujifilm’s FinePix Real 3D W3 ($499.95)—a 10 megapixel beauty designed from the ground up as a 3D camera that also shoots 2D images. Like the aforementioned stereo 35s of yore, the 3D W3 has two lenses on either side of its front housing (in this case, 35–105mm equivalent Fujinon zooms) to capture simultaneous pairs of images. And, users can shoot photos or HD 720p 3D movies at the press of a button and view them in glorious 3D on its large 3.5-inch 1,150,000-dot lenticular LCD—without wearing 3D glasses!

Other 3D modes include: individual shutter 3D shooting, so users can take two shots of the same subject and have the camera merge them as a single 3D photo; and interval digital shooting for creating super 3D effects when shooting faraway subjects from cars, trains and airplanes. Its range of 2D features is almost as mind-boggling: tele-wide shooting (a zoomed in and a wide-angle view shot simultaneously); and two-color simultaneous shooting, which lets shooters take photos of the same scene in two different color tones. There’s a lot more to this incredible machine than we can cover here, but one thing’s for sure—it’s an out-of-the-park home run for Fujifilm! fujifilmusa.com

Here’s another reprise from the 1950s that’s gone digital. Classic Leica and Contax aficionados may recall the Stemar and Stereotar two-lens units you mounted on the front of a posh 35 in place of a conventional lens when you wanted to shoot stereo pairs (two images per frame). Well Panasonic now offers the ingenious Panasonic Lumix G 12.5mm f/12 3D lens ($249.95) for cameras using the Micro Four Thirds system. It features two lenses installed within its mount, creating stereo images from the left and right lenses that are processed with its 3D image processor and viewable on Panasonic’s Viera 3D TVs.

For videographers, this past summer Panasonic unveiled its HDC-SDT750 as “the world’s first consumer 3D camcorder,” with a 3D conversion lens to shoot “true-to-life 3D video content” for playback on compatible Viera HDTVs. The SDT750 also records 1080p Full HD video in AVCHD, when the 3D conversion lens is unattached, and it includes a 46mm f/1.5–3 Leica Dicomar lens with 12x optical zoom. To shoot 3D video, users need to attach the bundled 3D conversion lens, which is specially designed to record right-eye and left-eye images simultaneously through its two lenses, thus resulting in video that can be viewed in 3D. panasonic.com

Now joining the 3D-capable camcorder offerings is Sony’s HDR-TD10 3D camcorder with a 3.5-inch built-in 3D LCD monitor that allows each eye to see a different set of pixels to create a sense of depth—without using special glasses. The TD10 shoots 3D with Sony’s Double Full HD technology, using Sony G lenses, Exmor R CMOS sensors and Bionz image processors. Consumers can always experience Full HD playback both in 3D and 2D when the TD10 is connected to an HDTV with the supplied HDMI cable. sony.com

And for something completely born digital, there’s Roxio Creator 2011 ($99.99)—a software suite with a feature set for capturing, editing and sharing personal 3D photos, videos and projects. Roxio Creator 2011 allows family memory keepers to convert their existing 2D digital photos and videos into 3D content that they can view on a standard computer monitor and TV set. It even includes a pair of 3D glasses! Creator 2011 also works with all the latest 3D capture and display technologies, so users may add a completely new dimension to their personal memories. roxio.com

Stay tuned, because 3D photography is on the rise—and a great complement to the new 3D HDTVs on everyone’s wish list.