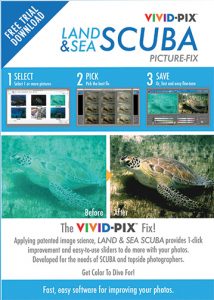 “Photographers, photo instructors and many pros within the scuba and photo industries love our software. But they asked us to support these other file format—and we listened,” explained Rick Voight, CEO of Vivid-Pix. “We then considered how to best help folks learn how to use the software. Who better than Cathy Church, who already teaches photographers, instructors, stores and dive operators how to get better photos!”

“I was thrilled when Rick asked me to develop his training tutorials,” added Church, underwater photo pioneer, author of six books and owner of Cathy Church’s Photo Centre in Grand Cayman. “Since before Vivid-Pix was a company, I’ve been amazed at what Randy [Fredlund] has accomplished with the software development. And now by adding these other formats, everyone can enjoy the fun and easy-to-get terrific underwater and topside photos.”

Recognized as one of the world’s foremost teachers and authors on underwater photography, Church was a photo editor for Skin Diver magazine for 15 years. Furthermore, she has coauthored hundreds of magazine articles and written six books on underwater photo techniques. She also offers seminars throughout the world, including at her facility in Grand Cayman.

Picture-Fix Support for RAW and DNG

“As more and more cameras and photographers began using file formats beyond JPEG, the need to expand the capabilities of our software became apparent,” said Fredlund, CTO of Vivid-Pix. “The software programmers rose to the challenge, and the resulting software and images tell the story.”

Vivid-Pix Land & Sea Scuba Picture-Fix software is available as a free trial and for purchase at https://vivid-pix.com/land-sea-plus.html. For a video describing the capabilities of the software, click here.