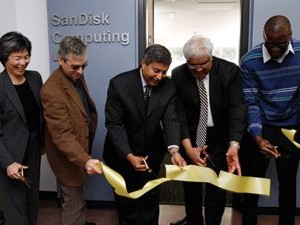 Milpitas, CA—SanDisk Corporation announced a $1 million donation to the College of Engineering at the University of California, Berkeley. The donation will fund recently completed renovations to Cory Hall, home of the college’s Department of Electrical Engineering and Computer Sciences, and the undergraduate student computing lab, which has been renamed the SanDisk Computing Lab.

“SanDisk has been our valued partner on many fronts: providing scholarship and fellowship support and now making possible a cutting-edge computing facility for our students,” said S. Shankar Sastry, dean and Carlson professor of engineering at UC Berkeley. “By supporting a public university that draws students from every stratum of society, SanDisk is advancing STEM education and preparing more engineers to lead economic growth.”

“As a company built on a strong engineering heritage, SanDisk places a priority on making contributions that will help foster the education and growth of tomorrow’s engineers,” said Sanjay Mehrotra, president, chief executive officer and cofounder of SanDisk. “No doubt, the students that use these facilities will go on to have an incredible impact on our region, nation and world, and we’re honored to contribute to the formative experience they will receive while at UC Berkeley.”

The SanDisk Computing Lab was unveiled at a ribbon cutting ceremony on April 18, 2014, during which Mehrotra, a UC Berkeley graduate and member of the College of Engineering advisory board, met with students.

The donation will also fund renovations to the main corridors of Cory Hall, as well as the acquisition and installation of up-to-date equipment and furnishings for facilities used by undergraduate and graduate students.

The announcement underscores SanDisk’s ongoing commitment to furthering STEM education, and follows the recent announcement of recipients for the 2013–2014 SanDisk Scholars program. The program provided more than $1 million in scholarships and grants to nearly 100 undergraduate and graduate university students in the United States to support their pursuit of degrees in a science, technology, engineering or mathematics discipline. sandisk.com