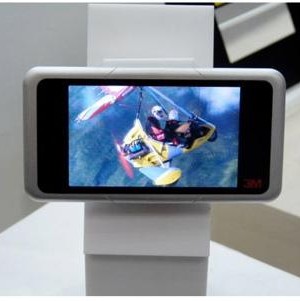 3M’s Japanese headquarters in Tokyo, Sumitomo 3M, has recently previewed an optical film capable of, “bringing naked-eye 3D to small- and medium-size LCD panels,” the company said in a released statement. 3M is claiming that no special glasses or viewer device is needed to experience that 3D effect.

The technology, demonstrated at FPD International earlier this year, is said to retain spatial resolution and enables quick switching between 2D and 3D content.

3M added that the special film utilizes dome-shape lenses on the visible surface of the LCD, while prism-like structures are placed on the back side of the film. To create a 3D representation, the film requires separate edge-lit LED light sources on both the right and left sides of the display panel.

Sumitomo 3M showed the technology working on a 9-inch display and a smartphone with a 2.8-inch screen. The company has already begun volume production, although details regarding specific products have yet to be announced.