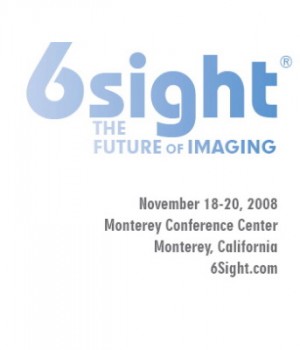 Bill Lloyd, chief technical officer of Eastman Kodak Co., is the first imaging executive to be interviewed as 6Sight Radio debuts on the wsRadio Network. The 6Sight Radio broadcast is streamed live and then stored at http://www.wsradio.com/6sightradio.

Lloyd will share his decades of experience in photography, and discuss the most important changes in the photography business – completely new technologies, increased competition, and changing consumer needs and desires. Future Image senior analyst Paul Worthington will ask Lloyd about his goals at Kodak, as well as which directions he sees the overall imaging industry taking in the coming years. Specific topics will include Kodak’s work in camera-phones in particular, and mobile imaging in general, and its recent significant improvements in image sensors.

Lloyd will also be a keynote presenter at the 6Sight® Future of Imaging Conference, at 9 a.m., Nov. 19, in Monterey, Calif. His presentation, entitled “Press the Button 2” accelerates the growing level of attention being paid to the future of imaging by business leaders, media and financial analysts. Lloyd, who joined Kodak in 2003 and became CTO in 2005, was co-CEO of Phogenix Imaging, the joint venture between Kodak and HP Co. He was at HP for 31 years as group vice president and CTO for consumer imaging and printing following 7 years in the aerospace industry. He received a BSEE degree from UCLA and a MSEE degree from Stanford University. He is the author of numerous technical papers, co-author of a book on hardcopy output devices and holds 12 U.S. patents and numerous international patents. He has served on engineering advisory boards at Rochester Institute of Technology, University of California at San Diego and California Polytechnic Institute at San Luis Obispo.

“Once again 6Sight will showcase the emerging technologies, usage trends and business trends that shape how people will use images at home, at work and as members of communities, but this time it will be via the online radio medium,” said Alxis Gerard , 6Sight Founder and Program Chair. “The leaders whom we present on 6Sight Radio are the thought and action leaders in the imaging industry, and Bill’s experience and influence are second to none. We’re delighted to host this opportunity for Bill to share his vision and Kodak’s new direction with the millions who make up the wsRadio audience.”

Information about the 6Sight conference can be found at www.6Sight.com. Sponsorship opportunities remain available, including the 6Sight New Technology Fair, where the most exciting new imaging technologies are on display for the imaging executives, media, analysts and investors who attend the conference. For more information, contact Joe Byrd at JByrd@6Sight.com.