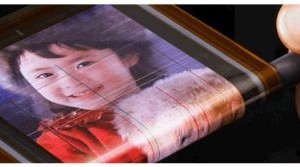 While flexible display technology continues to advance, many manufacturers continue to hit bumps in the road with regard to the current costs associated with high volume production of this tech.

Researchers at Duke University in North Carolina claim to have potentially solved these problems as they are claiming they can now produce transparent and conductive copper nanowires simply and in quantity. The cheap materials are said to be “ideal” for flat-screen TVs and flexible displays. The group are saying that their experiments with nanowires made of copper perform better than carbon nanotubes typically used and are much cheaper than silver nanowires.

The group explains that modern flat-panel TVs and computer screens produce images by an array of electronic pixels connected by a transparent conductive layer made from indium tin oxide (ITO). ITO is also used as a transparent electrode in thin-film solar cells. But, they argue, ITO has drawbacks: it is brittle, making it unsuitable for flexible screens; its production process is inefficient; and it is expensive and becoming more so because of increasing demand.
In a recent interview Benjamin Wiley, an assistant professor of chemistry at Duke, said,

“If we are going to have these ubiquitous electronics and solar cells we need to use materials that are abundant in the earth’s crust and don’t take much energy to extract.”

He pointed out that there are very few materials that are known to be both transparent and conductive, which is why ITO is still being used despite its drawbacks.

Wiley adds that copper, which is a thousand times more abundant than indium, can be used to make a film of nanowires that is both transparent and conductive. Silver nanowires also perform well as a transparent conductor.

There are lots of big players in the flexible display market including Sony, Universal Display and Philips and the work being done at Duke is being watched closely. We’ll be following developments in this market in future editions as the display technology touches the entire imaging industry.