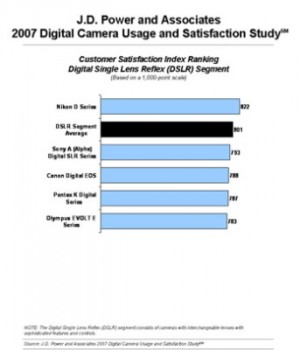 It’s always interesting to see how the major digital camera manufacturers fare in the annual J.D. Power and Associates 2007 Digital Camera Usage and Satisfaction Study. The research firm recently released the results of this year’s study and a different manufacturer sat on top of all four of the digicam categories they measure.

The Fujifilm Finepix F series ranks highest in the point and shoot segment with an index score of 749 on a 1,000-point scale, performing particularly well in all drivers of customer satisfaction. The Kodak Z series and Canon PowerShot A series follow in the segment rankings with index scores of 744 and 739, respectively.

Among premium point and shoot cameras, the Canon PowerShot SD series ranks highest with 829 points. The series performs particularly well in all factors that drive overall satisfaction. The Panasonic DMC-FZ series (785) and Kodak Z series (783) follow in the segment.

In the ultra slim segment, the Casio Exilim Zoom series leads with 802 points, performing particularly well in operation as well as appearance and styling. The Canon PowerShot SD series (796) and the Kodak V series (787) follow in the segment.

With a an index score of 822, the Nikon D Series leads the DSLR segment, receiving notably high ratings from customers in all four factors. The study finds that across all segments, brand loyalty positively affects customer satisfaction. Loyalty rates among owners range from 48 percent in the point and shoot segment to 67 percent in the DSLR segment. Coincidently, overall satisfaction improves across this same range, from 727 points in the point and shoot segment to 801 in the DSLR segment.

“The relationship between owner satisfaction and brand loyalty is critical to manufacturers in this highly competitive market,” said Steve Kirkeby, executive director of telecommunications and technology at J.D. Power and Associates. “A 10-point improvement in overall satisfaction can lead to a 1-percentage-point improvement in brand loyalty, particularly within the point and shoot, premium point and shoot and ultra slim segments.”