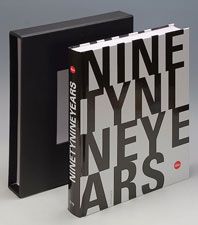 Allendale, NJ—For nearly a century, Leica cameras have captured fleeting moments and transformed them into stories highlighting the true human experience. The iconic image of the end of WW II, a sailor and nurse in Times Square, New York, embodies the excitement and relief felt in the U.S. on V-J Day, an immortal message not of love but of spontaneous joie de vivre.

As a stark contrast, yet just as intense, the palpable fear on “Napalm Girl’s” face reaches beyond the picture as she runs screaming from the wreckage that was formerly her home, announcing to the world that war also affects the most innocent people: children.

The story of Leica cameras’ legacy now comes to life in Ninety Nine Years Leica, a 300-page tribute to the emotive and legendary images that have become a part of our lives. The book sheds an emotional spotlight on 99 years of enthusiasm for a small camera developed by Oskar Barnack in 1913.

Part history lesson, part compilation of personal anecdotes, part pop culture retrospective, Ninety Nine Years Leica ushers readers into an undiscovered Leica Universe. A combination of compelling images and expressive texts tells the story behind the brand. Throughout the book, it becomes evident that not only has Leica played a role in the world’s celebrations, sadness, relief and hope but also in the lives of its camera owners.

The result of a collaboration between Leica and the multiple-award-winning publisher 99pages—under the creative direction of Ansgar Pudenz, Rainer Schillings and Till Schaffarczyk—Ninety Nine Years Leica takes readers on a trail of photographic discovery blazed by legendary Leica photographers such as Henri Cartier-Bresson, Robert Capa and Elliott Erwitt.