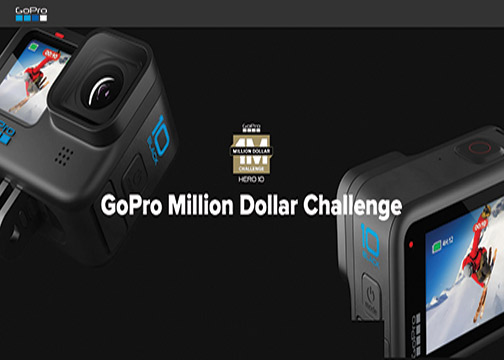 San Mateo, CA—For the fourth year in a row, GoPro is challenging its users to create the launch highlight reel for its new flagship camera. However, the contest is open exclusively to owners of the just-released GoPro Hero10 Black. What’s more, the Million Dollar Challenge will award an equal share of $1,000,000 to entrants whose video clips are chosen for the Hero10 Black Million Dollar Challenge video. GoPro will release the video in December 2021.

In addition, the action camera is cloud connected; when users plug it in to charge, it automatically uploads recently captured footage to a GoPro cloud account. This feature, along with unlimited cloud backup of GoPro footage at original quality, is available to GoPro subscribers for $4.99 a month or $49.99 a year.

“The Hero10 Black is one of the most impressive cameras in the world, regardless of price,” said Nicholas Woodman, GoPro founder and CEO. “Congratulations to our product and engineering teams on creating such a worthy 10th edition of our beloved Hero camera.”

Users of the Go Hero10 Black action camera are now invited to capture and submit their video clips for consideration to the Million Dollar Challenge. Moreover, they may post their submissions on GoPro.com/MillionDollarChallenge. Submissions close December 1, 2021 at 11:59 p.m. PT.