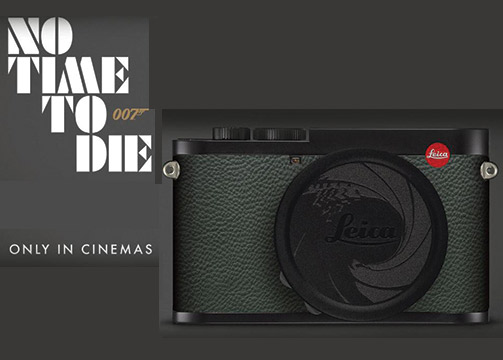 Allendale, NJ—Leica Camera unveiled a new Leica Q2 camera to celebrate the release of the 25th Bond adventure, No Time To Die. The Leica Q2 007 edition camera is limited to only 250 pieces. Moreover, the camera “exudes understated elegance—just like James Bond”—and is marked by Leica’s minimalist design.

This special edition Leica Q2 features the iconic 007 logo on the deck cap. It also has the famous Bond gun barrel design on the cap. Furthermore, each limited-edition camera is individually numbered to make the 007 camera a collectible.

In addition, the camera comes in a customized case. British luxury suitcase brand Globe-Trotter designed the handcrafted case. Inspired by the bespoke Globe-Trotter cases featured in No Time To Die, both the camera case and camera are finished in the same Ocean Green leather colorway.

The concept of a Leica and 007 partnership began with Michael G. Wilson. Wilson, producer of the James Bond film series together with his sister Barbara Broccoli, is a leading expert on 19th century photography. In fact, they founded The Wilson Centre for Photography. Wilson’s passion for photography provided the natural spark for the collaboration.

What’s more, Leica’s partnership with British cinema’s longest-running film franchise has seen the cameras play a role both on set and behind the scenes. In No Time To Die, Leica cameras are displayed on the sets of James Bond’s Jamaican home; fittingly, the Leica Q2 is also in Q’s home in London.

No Time To Die Photography Exhibition

Moreover, the Leica Q2 007 edition launched in early September at the official opening of the Leica Gallery London exhibition: No Time to Die—Behind the Scenes. It is an exclusive photography exhibition featuring behind-the-scenes photos shot on Leica cameras.

The photographs were taken by longtime producer Michael G. Wilson; James Bond actor Daniel Craig; as well as the renowned photographers Nicola Dove and Greg Williams. The exhibition presents an edit of 25 images curated by Wilson.

Further exhibitions will show in Tokyo, Osaka, Vienna, Frankfurt, Los Angeles, Singapore, China, Seoul and Salzburg in September/October 2021. In addition, Leica Fotografie International will publish a portfolio of the exhibit in the magazine that will appear on September 20, 2021.