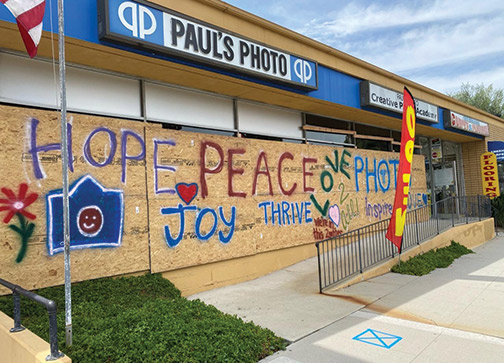 This is certainly one of the most challenging times facing our industry and photo specialty stores, as well as many industries, in our nation’s history.

If the Covid-19 pandemic and subsequent unemployment statistics weren’t enough, the unfortunate murder of George Floyd on the streets of Minneapolis led to a wave of peaceful protests as well as unlawful looting in many cities nationwide.

The worst was probably the regrettable burning and looting of Central Camera in downtown Chicago. The camera shop was founded in 1899 and operated at its current location at 230 S. Wabash Avenue since 1929.

The heartbreaking but resolute interview with third-generation owner Don Flesch is found here. He was able to salvage his grandfather’s camera, sitting in his window, as he left the looted, burned-out store. 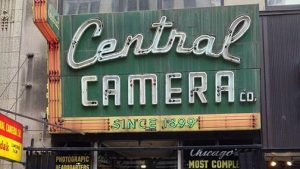 Don’s response was inspirational. “We’re going to rebuild it and make it as good or better,” he said. Moreover, there’s a GoFundMe page to help rebuild Central Camera. As of this writing, there was $165,000 pledged toward their $250,000 goal.

There are now many issues facing our industry, stemming from phased store openings; new rules concerning workplaces as well as employees; PPP Loan implications; merchandise availability; and the consumer’s desire to spend money again in the face of personal challenges.

In light of this, I asked retailers to provide an update of their situations. The hope is we can all understand the balance of what’s happening and learn from others, recognizing this is just a snapshot of today.

I believe our worst days are behind us, as evidenced by some of the bright spots mentioned below. The strong bonds most retailers have with their customers will prove the linchpin to a bright future.

I thank those who contributed. We’ll continue to cover individual stories that will guide us through the next few months.

We were certainly in the epicenter last night in Tulsa; however, we were very blessed to receive zero damage. The jewelry store next to us was not so lucky; the tire store across the street, not so lucky, etc. . . . as numerous businesses were broken into and looted.

This morning while we were cleaning up, we found three shotgun shells designated for police use that have the weighted sock inside them. So, apparently the police interacted at our front door last night. . . . Still on pins and needles as more is expected, along with a fairly soft May. . . .

Very challenging times, and I know everyone’s plate is very full. We search for the best wisdom and resources to rebuild our business.

We were forced to close down our stores in late March. We decided to keep all of our employees on our payroll and have them work from home. For some this meant doing sales from their house; however, for most it meant using the time to do online product training and create online content for us. During this time, we did business on our website and over the telephone.

In mid-May, we got to open two stores out of our eight total. Moreover, on June 1 we were able to open one more. The remaining five stores are currently open for curbside pickup only. In addition, we hope they will get to reopen in the next seven days once the state allows.

What’s more, our online business is fantastic, and we’re also having a lot of success with our online photo classes. Being adaptable and a diverse company certainly has made things easier.

Here in the Northeast, Covid-19 restrictions are much more severe than the rest of the county, and it has certainly made things more difficult. However, we are looking forward to reopening completely.

We have remained lucky with the protest issues. All of our stores are outside of the areas that have had large protests; we are thankful for that.

We are still unable to let customers into the store a

nd are restricted to curbside only for two weeks. Fortunately, riots did not reach our neighborhood. Currently, we are also under an enforced curfew that should keep the riots down.

I’d love your in-depth reporting, attempting to answer: What happens next? We’ve lost two of our three camera manufacturer reps; in-person classes and workshops are also on indefinite hold. Plus, what will product availability be like from vendors? When PPP money dries up, and with a forecast of 50% of business versus last year, will any of us meet obligations based on current margins?

We are okay. We are boarded up for protection, and the National Guard is moving in today.

So far, most of the looting is 10 blocks away from our Salt Lake City store. Hopefully, it will stay that way.

We lost a couple of windows in our downtown stores due to the riots in Indy on Saturday night. However, nothing terrible (so far). Moreover, we are open for business and just taking things one day at a time.

We had looting in downtown and other areas of Las Vegas the last few nights. There were also violent protests on the Strip. Sadly, one police officer was shot in the head and one protester was shot dead on the Strip Monday night. However, it looks like the protests were peaceful last night.

Some casinos and hotels are opening tomorrow with limited capacity; this should bring the unemployment rate down a little from the 30% we’re at now. Some Casinos might not open for many months to come. What’s more, some businesses/restaurants might never open again.

As our economy relies nearly only on traveling/tourism, gambling, shows, concerts, nightclubs, pool parties, dining and conventions, we will be in a difficult economic situation for a long time to come.

In addition, we have the unusual situation of facing multiple huge challenges at the same time: the strongest recession in a century; the highest unemployment rate in our lifetime; a federal government with the highest deficit ever; state as well as local governments on the brink of bankruptcy; a pandemic that’s unsettling the population/customers/employees; civil unrest, with massive looting and also the largest property damage in a generation; as well as an industry decline.

We have to manage effectively in this challenging time; then we will can rise stronger and better than ever before in a year. Former generations of managers faced very challenging situations as well.

Let’s help each other share good ideas and successful improvements in our businesses and act as one industry!

Nebraska was not an epicenter for any of our world’s recent problems, fortunately. Although, we avoided disaster on Monday in Omaha when a local bar owner who shot a protester last week was released and charges were dropped. Protests take place every night; however, they are mostly peaceful and a good distance from our store locations.

Joe’s e-mail pretty much sums up the challenges we face as an industry, and as a nation. We have been open for business in one way or another through all of this. One thing we have learned is that our customers need us and are thankful we are surviving. Local, small businesses have had a bright light shined on them, and consumers are paying attention. We have some slow days, of course, but also some surprisingly good ones too.

We are grateful to still have a business to come into each day and to work with our remarkable team to overcome these unprecedented challenges.

Fort Worth and life is interesting for sure this year. Covid-19 has really hurt business as well as foot traffic, but we are also seeing some light. There are too many variables to pinpoint and too many cooks in the kitchen to see how long a haul this will be. Government, news, emotions, etc., have moved the goalpost too many times already. I think it’s too hard for people to know which way to swim at the moment, and that is causing issues as well.

We are open and have been working since the beginning. We are currently requiring masks to be worn by employees and customers alike; however, some of the pushback is too emotional for me. There’s too much uncertainty in my opinion from all directions. But I/we are still making things happen like we always do.

As for the protests and riots in Fort Worth, we as a city are fortunate so far. I think most everyone is doing the right thing for our community. Police are praying and talking with protestors, etc.

They say “that which doesn’t kill you, makes you stronger.” Well, I think we are a strong people and a strong county. However, maybe it’s time we also get nicer, smarter, quieter, funnier and happier as well.

I’m praying, wishing and hoping for us all (and trying to move my feet).

Horn Photo is going through the same challenges as everyone else. Some more or less, depending on your and our exact situation. A few of the big ones are cash flow, staff highs and lows, as well as Covid-19 safety importance.

As for employees/staff. That is more interesting than I had predicted. There were some real disappointments and others that were such a pleasant surprise. We are coming out of this with an entirely different group of people. They are either in or not. Responsibilities and duties also have changed. There are managers who are not managers now as well as lower level people who are either now management or soon to be managers. Way different than I would have thought.

The solid, concrete part of all this is our customers! They have supported us online, curbside and fully returning to the counter as we reopen. They are our inspiration! In the early part of this, a good customer (a judge here in Fresno), e-mailed to ask if he could pay for his Christmas cards now because he wanted to help us. I almost teared up on that one.

One thing that seems to have really worked for us was a TV campaign we started 10 days before we reopened. Our local NBC and CBS TV stations really helped us out with great rates and also bonus airtime. We drilled down to exactly “what we know” and “what people were asking for.” Archiving; video and movie transfers; scanning of film, slides and prints; as well as old photo restoration. These are things that make us money and separate us from the competition. We could feel this was our best focus as we burst out of the tunnel. Here is the TV spot we are running.

In addition, our lab is overwhelmed with work right now. The store is busy with all the customers coming in, and that helps drive everything else. Camera sales are coming back and soon more will follow: rentals, classes, etc.

Note: We stayed away from all the webinars and online classes. I just felt it was not as important as concentrating on the management and correct advertising for Horn Photo during this time. The online branding stuff was a little too vague and feel-good for me. I need to point more at solid profit-generating actions.

Finally, things look pretty good from where we are right now. The last two nights there were scheduled protests and riots in our shopping center, but nothing happened. We were one of just a few who did not board up our store. It looks like it was a good call. Hindsight is 20/20.

Sales are strong and we are feeling very positive!

Editor’s Note: This story was written on June 3, 2020, during the height of the civil response to George Floyd’s death.