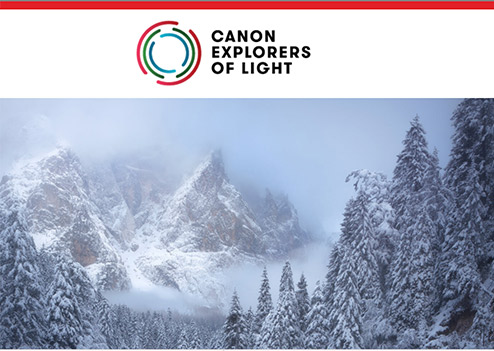 Each photographer brings their own blend of art and creativity by capturing life and culture from perspectives that are uniquely their own.

What’s more, for more than 25 years, members of Canon’s EoL program have shared their knowledge and vision with the photographic community and consumers. Whether it is photojournalism, fashion, outdoor and nature, sports or portraiture, their collective visions have provided unique perspectives of the world.

They have also helped hone the skills of professional photographers and enthusiasts through the program’s educational initiatives. As photography has evolved over time, so too has Canon’s EoL program; it embraces new talent with new perspectives while honoring the masters before them with the exclusive title of Canon Legend.

“The Canon EoL program is a platform for some of the most successful and influential photographers to showcase their vision, knowledge and know-how through a variety of educational initiatives. As new generations of creatives use photography to explore new perspectives on the world, Canon will continue to provide the support needed to tell their stories.”

A British born fashion photographer and educator, Lara Jade is based in New York City. She started her career as a self-portrait photographer and eventually found her feet in the fashion and beauty world. She is inspired by feminine strength, unique beauty and timeless style. Some of her notable clients include Vogue Japan, Harper’s Bazaar UK, Bobbi Brown and also Monique Lhuillier.

“Fashion photography isn’t just about selling a product,” Jade says. “It’s much more than that. You strive to capture iconic imagery and be a convincing storyteller no matter the project. There are so many elements that have to be right to create a successful and memorable fashion image!”

A portrait and editorial photographer, Lynsey Weatherspoon is based in both Atlanta, Georgia, and Birmingham, Alabama. Her work has appeared in the New York Times, USA Today, NPR, the Wall Street Journal, Washington Post, Time ESPN and ESPN-owned The Undefeated.

The fingerprint of heritage is found on assignments and personal projects featuring Black Lives Matter; Gullah Geechee culture; unsung players in the Negro Baseball League; and the last of dying breed—a shoe cobbler. The African American Museum in Philadelphia has also exhibited her work. Moreover, she is an awardee of the Lit List, 2018.

“As a photographer and artist, my priority is to archive the moment when someone realized they were making a difference through their life’s journey and telling their story,” says Weatherspoon. “Images can be described in such a way that it affects the hearts of those who see them. In that instance, the purpose of being a photographer comes full circle.”

World-renowned child photographers, Regis and Kahran Bethencourt are a husband and wife duo. Moreover, they are the imaginative forces behind Atlanta, Georgia-based CreativeSoul Photography. The pair gained global recognition with their AfroArt series. The collection showcases the beauty and versatility of afro hair; it was conceived as a way to empower kids of color around the world.

In addition, they recently authored the coffee table book, Glory. It brings to life past, present and future visions of black culture. With more than 11 years of working with hundreds of children, families and also brands, they specialize in child and lifestyle photography while incorporating authentic visual storytelling.

“As artists, we are constantly responding to the world around us,” the couple says. “We don’t want to just question traditional standards of beauty; we want to shatter them.”

An American photographer, Jefferson was born in Colorado Springs and grew up skateboarding there before moving to California in 1995. He now lives and works in Los Angeles. Best known for his 25 years of skateboarding photography, he has worked for all the major skateboard publications. Currently, he works at Thrasher magazine.

In addition, Jefferson has a deep history in basketball; he was a staff photographer for the LA Lakers during the Shaq and Kobe years. Moreover, he shot more SLAM magazine covers than any other photographer. He has also photographed for commercial clients such as Supreme, adidas, Nike, Converse, Reebok, ESPN, Gatorade, Mountain Dew, Oakley, Panasonic, Pepsi, Canon and Netflix.

“What I love the most about photography is the moment in time you capture that will never happen again. It’s magic,” Jefferson says. “I also believe you are only as good as your subject; so, I’m so honored when people allow me to take their photograph. I see pictures everywhere I look. Photography is in my blood, which means I haven’t really worked a single day in 25 years.”

To see samples of the work of Canon Explorers of Light, click here.