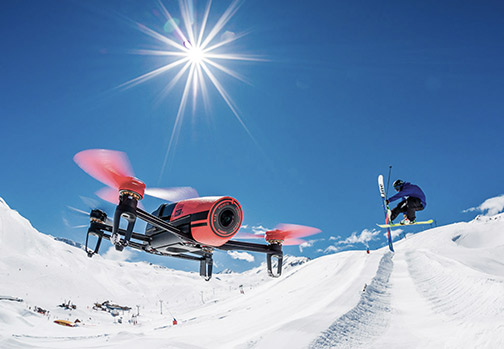 The term “eye in the sky” may be taking on new meaning the way drones continue to fly the friendly skies in greater numbers.

A widening price spectrum is putting them within reach of a wider subset of consumers. They include curious novices and enthusiasts, alike. With better onboard cameras, aerial photography could be entering a new phase.

Capturing a vista or skyline, previously reserved for the minority who had access to gear that could do it, is child’s play for anyone now. Drones, big and small, light and heavy, are usually laden with at least one camera that can see it all. And they do this through wide-angle lenses casting a wider view.

What can and can’t be viewed is slowly beginning to become clearer. Regulators are starting to mandate how, when and where drones can fly. The ubiquity and range of drones today make most aerial vantage points easily accessible. This has prompted the Federal Aviation Administration (FAA) to maintain legal restrictions over the use of what it calls Unmanned Aircraft Systems (UAS).

The first two categories require certification by permit for both the pilot and drone. When flown for recreational reasons, the line is clear. If the drone is used to take photos and video clips for anything beyond personal use, it’s a civil operation requiring clearance for exemption. If it’s for recreational and personal use, then FAA approval isn’t necessary.

However, federal regulators did change tack in October 2015. They announced a new registration system for recreational drones. It is meant to keep remote-controlled devices away from passenger planes and other aircraft. This may have been the result of commercial pilots reporting a surge in drone sightings.

While there is no clear number of drones currently being operated by consumers and hobbyists, it is estimated that more than 700,000 may have been sold in the U.S. in 2015. This marks a 63% increase from the year before.

Those sales figures shouldn’t come as a surprise, given the various sizes and price points, along with improved flight stability and battery life in some of the models available. Here is a look at some of the more popular models.

A Foursome of Top-Flight Drones

Chinese manufacturer DJI upped the ante with the Phantom 3, bringing it to market in two iterations: Professional and Advanced. With a solid and sturdy build, the internal components give it a further push in every direction; it’s capable of cruising to an altitude of up to 1,640 feet and spanning a radius of 3.1 miles. A “beginner mode” limits flight to 100 feet in altitude and radius to help pilots acclimate themselves to how it works.

A more durable frame with better GPS (including GLONASS, Russia’s own GPS) leads to greater stability in the air. This helps the Phantom withstand higher wind gusts to avoid veering too far away. The added location data also helps the drone know when it has exceeded its range. It will then reengage and fly back to its original takeoff point.

The Professional model can shoot video in up to 4K resolution. The Advanced maxes out at 2.7K. Both models assure Full HD 1080p recording at 60 frames per sec. The 12MP camera also captures still images, including during video recording, using the free DJI app (iOS and Android) or controller.

The drone’s camera has a 3-axis gimbal system that affords it a 90º tilt facing down, as well as a 94º lens that reduces any fisheye effect. The axis also offers image stabilization to keep footage or images from coming out shaky or blurry.

The controller uses joysticks to manage elevation and orientation. And there is a holder for a smartphone or tablet, ranging from 5-inch screens to 10 inches. The DJI app displays live footage from the Phantom’s camera in 720p, with an array of options to control recording, as well as shutter speed, ISO, white balance and camera tilt. Live streaming to YouTube over 4G LTE/3G or Wi-Fi, if applicable, is another way to share content. And, Follow Me is a tracking feature that tells the drone to follow the pilot, making it possible to shoot oneself from a variety of angles.

In trying to focus on the inner workings and outer performance of the Solo, 3D Robotics opted not to include a camera, leaving compatibility primarily with GoPro action cameras. The result is a modular approach that may be less restrictive than other drones in its class.

At its core is a similar quadcopter form factor with standing legs underneath for landing and to create ample room for a 3-axis gimbal. The gimbal 3D Robotics offers is sold separately, though it is specifically designed to fit and function with a GoPro Hero 3+ and 4, including keeping the latter’s battery charged, if necessary. This cross-functionality means pilots can control positioning and recording through the free Solo app for iOS and Android. Resolution, frame rate and image quality are also GoPro’s territory, with settings adjustable through the app.

Range and altitude don’t push the envelope, maxing out at half a mile and 400 feet, respectively. This is largely because of the limits of the controller and FAA regulations. It can be expanded upon through different controllers that are Solo-compatible. The Solo is fairly light at only one pound, yet it’s rigid enough to handle gusts of wind and maintain stability while in the air.

Shooting modes do offer a little variety, with some peace of mind to boot. Cablecam locks the drone onto two virtual points to follow a direct flight path between them, leaving pilots free to pan and tilt the camera along the way without worrying about controlling the drone’s movement. Orbit has the Solo circle a subject automatically for a wraparound effect. Selfie has the drone hover in front of the pilot or subject and then pull away before returning to capture a wider scene. Follow links the Solo to the pilot, following him or her at all times.

As its name implies, the Voyager 3 doesn’t have its own camera. Instead, it relies on a strapped-in GoPro cam to do the job of recording footage and still images. In going this route, Walkera was able to effectively utilize the same frame and construction of the Voyager 3—and offer 4K recording through the use of the most popular action cam on the market.

A sturdy quadcopter, the Voyager 3 GoPro has deformable landing gear that rises upon takeoff and drops prior to landing. This includes the 3D gimbal that houses the GoPro, which extends when the drone is airborne. Panning at a full 360º, the gimbal is also removable, allowing the drone to fly without it, if need be. The elevated landing gear does give the camera an unobstructed view without having to reorient the drone to face what the pilot wants to shoot.

In utilizing both GPS and GLONASS, the stability and consistency in flight performance should keep the Voyager 3 buzzing without straying too far. To add some peace of mind, Walkera built in a “return-to-home” function. This feature brings the drone back to its original takeoff spot at any time. It’s also programmed to automatically do the same if it strays out of range of the controller. Maximum range sits between 0.62–1.24 miles. However, transmitting images to the controller requires going to the lower end of that spectrum.

It is rated for 25 minutes of battery life. Like other drones, the number tends to skew downward based on weather conditions and image transmission. $1,999.99 (GoPro not included). walkera.com

The Hydrofoil is unique in that it is a waterborne drone. Not outfitted with the best camera, it has some flexibility that could change that.

The design is somewhat of a hybrid in that the top piece looks like an offshoot of Parrot’s Rolling Spider MiniDrone. The mini quadcopter is attached to a floatation chassis with fins burrowing into the water below. As the Hydrofoil skims the water and picks up speed, the quadcopter elevates perpendicularly, lifting the nautical body to hover about two inches over the surface. Parrot recommends using it only over freshwater and considers it stable enough not to capsize.

The quadcopter piece is detachable. It has a VGA (640×480) camera in front that isn’t comparable to what typical drones have. The drone has only 1GB of flash storage onboard. Recorded footage can be passed on to the iOS or Android device courtesy of the free FreeFlight 3 app.

Speed tops out at 6 mph, and battery life won’t crack seven minutes. However, a second battery comes in the box and takes 25 minutes to fully recharge.

With such a lightweight body, mounting a GoPro or other action cam onto the nautical chassis may affect speed and make the Hydrofoil vulnerable to capsizing on quick turns. Parrot doesn’t mention third-party cameras, so experimenting in this fashion does come with inherent risks. $179.99. parrot.com/usa