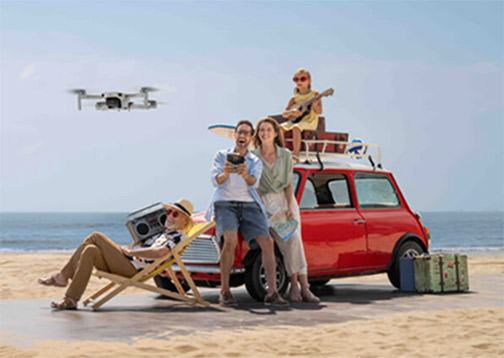 The successor to DJI’s original Mavic Mini, the Mini 2 is easy to fly. In addition, it offers improved imaging capabilities and enhanced transmission technology for a longer, more reliable connection. Moreover, intelligent, preprogrammed modes were optimized so users can capture footage with just a few taps. What’s more, beginner tutorials and learning tools help get new pilots up to speed on how to fly the new drone. The drone is also supported by fun, safe and creative accessories.

“Mavic Mini was a monumental breakthrough for DJI and for drone pilots across the world; its unprecedented combination of weight, safety, performance and overall value became the entry point for countless new drone pilots and fans,” said Roger Luo, DJI president. “DJI Mini 2 enhances those key aspects; it packs larger drone performance in an approachable, small design in the safest drone category that is perfect for beginners. It will also impress more experienced pilots.”

Like the original Mavic Mini, the Mini 2 sports the iconic folding design that makes traveling with a drone easy. Further, the lightweight system adds minimal weight to a bag for everyday take alongs. While small, the drone boasts impressive upgrades to vital flight performance features compared to the original version.

OcuSync 2.0 transmission technology was incorporated. DJI’s OcuSync 2.0 is responsible for ensuring a stable, long–distance and reliable connection between the remote controller and the drone. Dual-frequency technology automatically switches between channels to help against interference. As a result, the Mini 2 has a maximum transmission range of more than six miles; that’s a 150% increase in range over the original Mavic Mini. Furthermore, upgraded motors provide 31 minutes of flight time; faster acceleration and speed; as well as the ability to withstand 24 mph winds.

DJI also made the Mini 2 fun to fly, simple to operate, and safe for everyday use. A live feed from the drone’s camera is sent to a mobile phone so pilots can see exactly where the drone is and what it sees. In addition, simplified buttons and functions keep things streamlined and easy to understand.

As with all DJI drones, positioning and vision sensors help the Mini 2 hover precisely in place. GPS keeps track of where the drone is while the vision sensors on the bottom map out the ground below it and assist automated landing. Another safety feature is GEO fencing; it keeps drones out of sensitive areas like airports. Pilots can also activate its return–to-home function so the drone returns to them. And altitude lock is an adjustable limit on how high the drone will go.

The Mini 2 employs a 1/2.3-inch image sensor for capturing 12-megapixel images. It also records a maximum video resolution of 4K/30 fps @100 Mbps. In addition, images are saved in standard JPEG as well as RAW formats for advanced users who want to edit footage further. Moreover, a 3-axis gimbal compensates for drone movement and wind for smooth footage.

What’s more, while recording in 1080p, pilots can get closer to their subject without moving the drone. This is due to the 4x zoom (2x lossless in quality) option. In addition, the drone provides preprogrammed intelligent modes that do the hard work of capturing footage with set movements and imaging features. QuickShots preprogrammed movements and image capture modes include the following:

Additionally, the DJI Fly app and DJI Mini 2 have enhancements for sharing immediately on social media. Now, pilots can connect a cell phone directly to the drone without the remote controller. After capturing shareable footage, they can download images at 20MB/s when the drone has landed safely. Once the images are downloaded to the phone, users can edit them with dedicated editing tools in the DJI Fly app. Or they can use the new enhanced photo option, which applies edits automatically.

Moreover, as video footage can take up a lot of space, pilots can now choose to trim it before downloading using the trimmed download function.