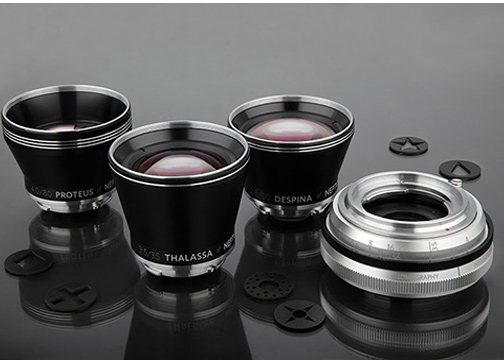 San Francisco, CA—Lomography’s new Neptune Convertible Art lens system is made up of three premium prime lenses as well as two aperture mechanisms. Introducing a unique way of shooting with the ability to mix and match focal lengths, f/stops and special aperture plates to adapt to a photographer’s style, mood or subject, the Neptune launched on Kickstarter.

The Neptune was created to offer unlimited stylistic possibilities to a new generation of photographers. The single lens system consists of three interchangeable lenses, each of which can be attached to the lens base, to shoot at a fixed focal length of 3.5/35mm, 2.8/50mm or 4/80mm. Users can also switch through a range of apertures and use special drop-in aperture plates to achieve countless styles.

Geared for capturing street, fashion, nature or portraiture photography, the system is also suitable for videography because of its seamless aperture. The handcrafted lens system boasts high-quality, multicoated glass optics. As a result of its close focusing distance, the Neptune Convertible Art lens system lets shooters get up close to subjects. “It offers clean and crisp shots, dense colors as well as freedom of choice in a small and compact design,” Lomography announced.

The lens system features three elements in three groups in the lens base. It also utilizes four elements in four groups in each of the interchangeable front lenses. Inspired by Neptune’s moons, each focal length is determined by the proximity of their lens’s namesake to that distant, blue planet.

The initial fixed focal lengths offer users creative flexibility. They can use the Thalassa 3.5/35 Art lens to frame architecture, street and urban scenes at 35mm. Or they can take advantage of the versatile 50mm focal length of the Despina 2.8/50 Art lens for fashion, editorial and everyday shooting. And the Proteus 4/80 Art lens is optimized for portraits and nature photography at 80mm.

In addition, using the dual aperture system, photographers have more creative options. They can rely on the iris diaphragm aperture mechanism for sharp photos and videos. Or they can use drop-in aperture plates to create rich, delicate bokeh to edge a frame.

Furthermore, the interchangeable-lens elements each work with the seamless iris diaphragm aperture mechanism to produce sharp images at smaller apertures and smooth bokeh at larger apertures. 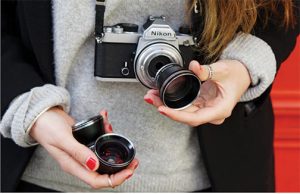 Each prime lens has its optimal maximum aperture—f/3.5 for Thalassa, f/2.8 for Despina and f/4.0 for Proteus. However, photographers can also push beyond these to experiment and produce unique effects with the Thalassa and Proteus lens elements.

The system is inspired by Charles Chevalier’s innovative convertible lens concept of the 19th century. But the lightweight, compact Neptune Convertible Art lens system is fully expandable. Lomography is already designing new lens components with a range of unique effects as well as possible focal lengths. These include an ultrawide-angle 15mm to a 400mm monocular.

The lens system is available in Canon EF, Nikon F as well as Pentax K mounts. It is also compatible with a range of other cameras—including Fujifilm, Sony, Olympus, Panasonic and Leica—using adapters available from Lomography

As a result of the Kickstarter launch, backers will save up to 45% on the retail price of the lens system, which will be $990. Furthermore, they will be deciding which focal length Lomography will be creating next. Kickstarter backers can vote for the focal length of the next front element that Lomography creates. The Kickstarter campaign ends June 7, 2017. As of May 20, the project had far exceeded its funding goal. lomography.com