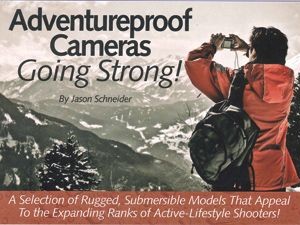 It’s no secret that plain, vanilla point-and-shoot cameras are an endangered species in a world dominated by interchangeable-lens cameras and increasingly better cameraphones. Some exceptions, however, are long zoom P&S models and high-end enthusiast niche models. And rugged, waterproof active-lifestyle cameras that do double duty as normal walk-around cameras and are also perfect for skiing, surfing, taking to the beach, on the boat, on a hike, or any other place one might think twice about taking an unprotected DSLR or mirrorless model.

Adventureproof cameras featuring waterproof, dustproof, shockproof and freezeproof construction have been around for decades. But over the past few years, this expanding market sector has seen a remarkable transformation, with new or seriously updated models from virtually every major camera maker, including Nikon, Canon, Fujifilm, Ricoh, Panasonic, Olympus and Sony.

Positioned at the intersection of high style, high adventure and cutting-edge technology, they deliver a satisfying blend of high-end performance and shooting flexibility. All of this makes them a high-value proposition for consumers who want to go anywhere, in any weather, and create memorable images along the way.

Here’s a compilation of the most enticing adventureproof models on the market. The fact that many of them come in a range of colors is another big plus in an age when everyone wants to personalize their tech devices.

Panasonic Lumix DMC-FT5. This indestructible-looking camera is waterproof to 43 feet, dustproof, freezeproof to 14º F and built to survive a 6.6-foot drop or 220 pounds of pressure. Wi-Fi enabled, the FT5 offers one-touch connection with NFC (Near Field Communication), so users can transform a smartphone/tablet into a remote control/viewer by touching the FT5 and smartphone or tablet together. And with Wi-Fi Direct, they can wirelessly playback images and Full HD videos on a TV. The FT5 incorporates: a 16.1MP CMOS sensor; a 4.6x, 28–128mm Leica DC Vario-Elmar lens with antifogging glass; a 3.0-inch, 460K-dot LCD; OIS; manual control; and creative control/creative retouch functions. Its unique quad indicator includes GPS/GLONASS, a compass, altimeter/depth indicator and a barometer. Other features include: advanced underwater mode; iA mode; intelligent HDR and night shot modes; full-res, 10-fps bursts; 3D shooting; and a torch light. Blue or orange. $299.99. panasonic.com

Nikon Coolpix AW120. Sleekly stylish but with plenty of attitude, the upgraded AW120 is waterproof to 59 feet, freezeproof to 14º F and will withstand a 6.6-foot drop. It features a 16MP CMOS sensor, a 5x, 24–120mm equivalent f/2.8–4.9 Nikkor lens and a high-res, 3.0-inch, 910K-dot LCD with brightness adjustment. Also offered are hybrid vibration reduction, built-in Wi-Fi, GPS and an eCompass, and it allows remote control via a smartphone/tablet. It even has a built-in map displayed on the LCD and a points-of-interest function that shows nearby photo ops. Other niceties include Full HD 1080p video capture with stereo sound, and a multitude of scene modes, including easy auto and underwater. Plus, Nikon’s action control lets users control selected functions one-handed by tilting the camera, making shooting with gloves easy as well. Orange, black, blue and camouflage. $299.99. nikonusa.com

Canon PowerShot D30. Canon’s distinctively styled, ergonomically contoured 12.1MP D30 is waterproof to an impressive 82 feet, shockproof to a drop of 6.5 feet and temperature resistant from 14º–104º F. It features a 5x, 28–140mm equivalent f/3.9–4.8 lens, a 3.0-inch, 461K-dot Pure Color LCD with a delta dot pattern for enhanced performance and sunlight mode to reduce glare, intelligent image stabilization (IS) and built-in GPS. The D30 can shoot Full HD 1080p video at a cinematic 24 fps and has a wind filter feature and the use of its optical zoom while shooting for maximum movie flexibility. It can shoot up to 280 shots or play back five hours of video per battery charge. The camera also boasts low-light shooting performance via Canon’s HS system. Blue. $329.99. usa.canon.com

Ricoh WG-M1. The latest in Ricoh’s advertureproof camera lineup, the WG-M1 is actually more of an action camera with a unique form factor. For active, outdoor shooters, it is waterproof to 32 feet, shock-resistant against a 6-foot fall and cold-resistant to temperatures as low as 14° F. With an ultra-wide-angle 160º lens, it’s also engineered to record Full HD movies with a realistic sense of depth. And its host of features includes multitasking, which allows users to check real-time images during both still and movie recording. Other features include: a 14MP CMOS sensor; bursts of 10 fps; a 1.5-inch color LCD; Wi-Fi connectivity; and a lightweight body with an outdoor-oriented design and large control buttons. Combining the WG-M1 with camera-mount accessories opens creative options in capturing stills and movies. Orange. $299.95. ricohimaging.com

Nikon 1 AW1. No, it’s not a P&S, but we included the 1 AW1 because it’s a rare breed as a ruggedized, waterproof, mirrorless, interchangeable-lens model. In the Nikon 1 series of compact, CX-format cameras, it’s waterproof to 49 feet, shockproof up to a 6.6-foot drop, dustproof and freezeproof to 14º F. It features: a 14.2MP CMOS sensor; a 3.0-inch, 921K-dot LCD; an advanced hybrid (phase-detection plus contrast-detection) AF system; and a pop-up waterproof flash. The AW1 can capture Full HD 1080i video at 60 fps, shoots full-res bursts at 15 fps, and offers HDR mode, wireless connectivity, a dual function altimeter/depth gauge, and GPS/GLONASS support that logs information into the metadata. Action control makes navigating menus easy using a tilt of a gloved hand. Wi-Fi is possible with the optional WU-1b wireless mobile adapter. Black, white and silver. $699.99 with 11–27.5mm f/3.5–5.6 lens. nikonusa.com