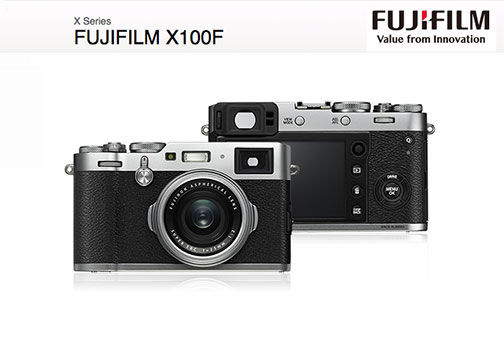 The premium, rangefinder-style point-and-shoot camera features a unique hybrid viewfinder that allows users to switch between an optical viewfinder and electronic viewfinder. The X100F is the fourth generation model in the series that introduced the first hybrid viewfinder camera.

In addition, to provide users with more precise framing and focus capabilities while using manual focus mode, a real-time parallax correction function is applied to the focus area in addition to the guide frame. Photographers can also now check exposure and white balance in the EVF window. As a result, they can experience all the benefits of the EVF while shooting through the OVF.

Fujifilm also upgraded the autofocus performance of the X100F with improvements to basic response time specifications. Specs state the X100F has a start-up time of approximately 0.5 second, a shooting interval of 0.2 second, a shutter release time lag of 0.01 second and AF speeds as fast as 0.08 second.

Furthermore, users can select between six AF modes, including single-point mode, zone mode and wide/tracking mode for both AF-S for stationary subjects and AF-C for moving subjects.

The number of focus points in the X100F was also increased to 91 (up to 325 points), from 49 points in previous models. Now, approximately 40% of the imaging area is covered with phase detection for fast, precise AF. In addition, Fujifilm notes the X100F has a greater ability to autofocus on points of light and low-contrast objects, to capture “detail in pictures with fine and delicate textures, helping to reproduce images just as photographers remember.”

Also included is a grain effect function for reproducing the distinctive graininess seen in photographs taken with film cameras. The function is available in a strong and weak setting, and it can be combined with any of the film simulation modes. This allows photographers to achieve the creative effects of film-based photos.

Fujifilm redesigned the rear face of the X100F to concentrate most of the frequently used functions on the right-hand side. This is to enable users to change camera settings quickly while holding the camera firmly and without having to look away from the viewfinder.

Furthermore, the focus lever positioned on the rear side of the camera lets photographers use joystick-type operations in eight directions to select a focus area. And the X100F also now features a built-in ISO dial incorporated into the shutter speed dial for ease of use. This permits users to check ISO and shutter speed, in addition to aperture and exposure compensation, from a glance and without having to power on the camera.

Other features include: a 1.04M-dot, 3-inch LCD; Full HD video recording at various frame rates; a silent electronic shutter capable of exposures up to 1/32,000 sec; an output for a stereo microphone; and a synthetic leather external finish.

The Fujifilm X100F digital camera will come in black and silver versions. It will be available in February for a suggested retail price of $1,299.95.

Fujifilm announced several optional accessories for the X100F that will be sold separately.

Leather Case LC-X100F. Users can change the camera’s battery and media card while the case is attached to the camera.

Tele-Conversion Lens TCL-X100 II. A dedicated tele-conversion lens, it narrows the field of view by multiplying the fixed focal length by approximately 1.4x. It thus converts it to 50mm (equivalent) for shooting portraits or close-up photography from as near as 5.5 inches. fujifilmusa.com