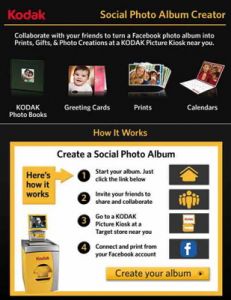 Kodak recently introduced a service they are calling Social Photo Album Creator for Facebook. The service allows consumers to easily combine photos from the popular social networking site with friends and family and then allow them to produce one album of all this content together.

“With the new Social Photo Album Creator Kodak has solved the problem of consumers having to look through dozens of different Facebook friend’s albums for pictures of a particular event,” Rolando Martinez, Retail Systems Solutions Americas Business Manager, Eastman Kodak Company, said as part of the announcement.  “Not only can Facebook users invite friends to collaborate in creating and sharing one album, now they can easily tell their story by making something unique with those memories in a matter of minutes.”

To start using the Social Photo Album Creator from Kodak now, visit here. where you can also locate a Kodak Picture Kiosk near you.