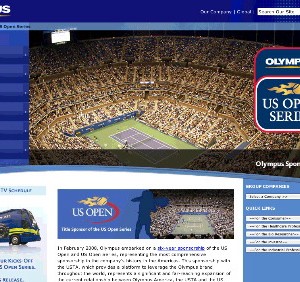 Olympus Corporation of the Americas, the exclusive title sponsor of the Olympus US Open Series and official sponsor of the US Open, and Blue Entertainment Sports Television (www.experienceBEST.com) recently announced that tennis star Sam Querrey has agreed to an arrangement with Olympus to help promote its products. Querrey joins fellow BEST Tennis athlete John Isner as the only professional tennis players with endorsement deals with Olympus.

Querrey, represented by BEST agents John Tobias and Sam Duvall, is the 4th highest ranked American player and is ranked 42nd in the world. On the heels of clinching the best US Open win of his career against Ivo Karlovic, Querrey will participate in Olympus’ programs to promote its brand and products. In addition to Olympus’ exclusive title sponsorship of the Olympus US Open Series, Olympus is the official camera of the US Open. Given Querrey’s quick rise in merely two years on the scene, his participation in Olympus promotional activities may include personal appearances at Olympus US Open Series events and the US Open as well as use of his likeness in media including television, radio, interactive, print and other collateral.

“I am honored to be chosen by Olympus to partake in promotional efforts for its prominent line of products, which  are valued by millions of consumers worldwide,” Querrey commented. “And I am thankful for this opportunity as it comes at a time when my career is continuously growing and flourishing.”

Regarded by many as America’s next great tennis pro, Querrey has quickly made a mark on the tennis scene in only two years, as he was the first player to win a “ATP Challenger Series” challenger event in his pro debut in 2006 in the ATP Challenger Series and holds the record for the most consecutive aces served (8) since ATP began keeping records of the statistic. Querrey broke into the top 100 World Singles rankings after his third-round performance at the Australian Open.

“Given his track record of success and ability to resonate positively with fans worldwide, we feel Sam is an ideal fit to represent our brand,” said Mark Huggins, Executive Director, Brand Marketing for Olympus Imaging America Inc. “We look forward to working with Sam as he continues on his path to  becoming a dominant player in the U.S. and abroad.”